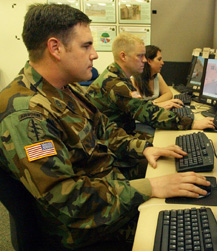 Soldiers fighting in Iraq have increasingly been using "blogs," which are online diaries, to stay connected to family and other soldiers. "Bloggers," as these journalists are called, often detail their experiences overseas, provide war pictures, and explore their feelings connected with the war.

Web sites such as www.thedailyblogster.com and www.hereinreality.com, which connect viewers to a host of soldier blogs, have appeared in response to public curiosity about life in Iraq. However, some military officials are censoring these popular blogs, often shutting them down, because they fear blogs will inadvertently reveal sensitive military information.

Kevin, a soldier whose popular blog has attracted 7,574 viewers (bootsonground.blogspot.com), describes the problem in his post. "A 3 star general approved an order that all milbloggers (bloggers affiliated with the military) have to tell their chain of command about their blog. This is very unfortunate obviously because a lot of people want to see the soldier’s side and plus [the people] see a lot of what is going on that the news can not and will not cover."

Readers of Kevin’s blog express outrage at the situation by posting comments on a message board. "Your immediate feelings and insights are too precious to be lost to a bureaucracy more concerned about its next promotion and political face than the truth," a man whose screen name is "Micky" wrote in response to Kevin’s entry.

Kevin emphasizes his attempt to maintain "a non-political website," and, indeed, chooses seemingly innocuous topics for his entries. For example, Kevin discusses recent movies, his thoughts on hurricane Katrina, and Web sites he recommends. He mentions his desire to add pictures, but adds that he will "carefully pick each picture to make sure it will not violate OPSEC in any way that could give the enemy possible intelligence."

Yet, not every military blog aims to remain non-political. Zachary Scott-Singley, a 24-year-old sergeant in the third infantry division in Iraq, pens a blog entitled "A Soldier’s Thoughts" (www.misoldierthoughts.blogspot.com), in which he offers his views on the United States government and current policy. Scott-Singley includes a disclaimer which states that the views expressed on his site are his and do not reflect those of the army.

Scott-Singley continues by discussing his belief that the Patriot Act "wears away our rights" and that Vice President Dick Cheney "has gotten away with so much." He says of his blog, "Some may think this is a place where you find no biases but to those I say, you are fools."

He conveys concern about his personal morality, as well, asking if his parents and country are proud of him for killing others. Often, Scott-Singley becomes melancholy, questioning his purpose and duty with statements such as, "Perhaps that is my legacy, to shatter what others (including myself) hold dear."

Some of his entries are hopeful, however, and express wishes that his stories will be published eventually. He often thanks his wife, Tara, for encouraging him to write.

Scott-Singley’s blog serves not only as a forum for sharing his personal and political views, but also as a means to communicate with his wife and sons. He frequently writes messages to his family members that communicate his love for them.

After articulating his loneliness on Christmas day, he concludes his entry with the sentiment, "I love you all and wish you well this day. I promise to be home soon."

Scott-Singley often ponders the future, not only of his family, but of his career, as well. He asks his readers to aid him in his job search upon his return to the United States, saying, "If any one of you has a career or job you think I might be suited for please feel free to email me and let me know."

Though Scott-Singley says his blog is merely a tool used to express himself and communicate with his family, some soldiers express a psychological need for their blogs. A soldier who calls himself "war is real," but who remains anonymous, describes the therapeutic value of writing.

"I’m a soldier by choice and a writer by necessity," he states in his profile (warisreal.blogspot.com). "War is real" describes his attempts to "feel better" by taking Zoloft (an antidepressant drug), Ambien (a sleeping pill), and by "sleeping off the misery."

He says, "I started writing this blog because I needed some form of therapy that the army wasn’t giving me and still isn’t giving me." "War is real" tries to sort through his conflicting emotions regarding his return to Iraq. He speaks of his dismay at parting from his family, and of his experience with Post-Traumatic Stress Disorder, a psychological condition that is characterized by an inability to deal with trauma in healthy ways. Writing provides a means of alleviating some of his pain.

Sometimes, though, the experiences of soldiers are simply inexpressible. Rusten Currie, a 33-year-old military intelligence officer in Baghdad, says that his passion for writing left him after his return from fighting overseas (currierd.typepad.com). He assumed that his failure to communicate his experiences was a consequence of his activities in the war.

Currie says, "I thought that losing the ability to give tongue to my thoughts had been a punishment for the things I’d done. I took my medicine and moved on and for three years I didn’t write."

He says that upon returning home, many soldiers feel "unable to communicate feelings, unable to release tension, unwilling to drop our guard, many feeling alone in what we once thought was a dream now seemingly a waking nightmare of freedom, with no one to talk to but those who know, those who are feeling the same uneasy feeling that home is no more."

Ever since his gift for writing returned to him, however, Currie has written verbosely. His blog serves as an outlet for his pent-up feelings.

Currie is now able to depict intense emotions over the deaths of friends. He says, "The anguish and bitter anger remain. I know what hate looks like, and in the mirror I see hate. I see anger and I see sadness. To people "back home" who did not know them, they are statistics in an ever increasingly unpopular war (as if there has ever been a popular war); to us they were brothers."

Yet Currie continues to believe firmly in the value of his role as a soldier. He says that his job brought meaning into his life. Despite being separated from his wife for 80 percent of their married life and undergoing traumatic war experiences, he nevertheless appreciates his opportunity to serve.

"For me, realizing that the world could be a cold, dark and lonely place was disheartening, yet also realizing that within this world there was good, purity, and wonder was foretelling," he says. "It gave me my calling."
Article posted on 2/27/2006
This article has been viewed 3606 times.