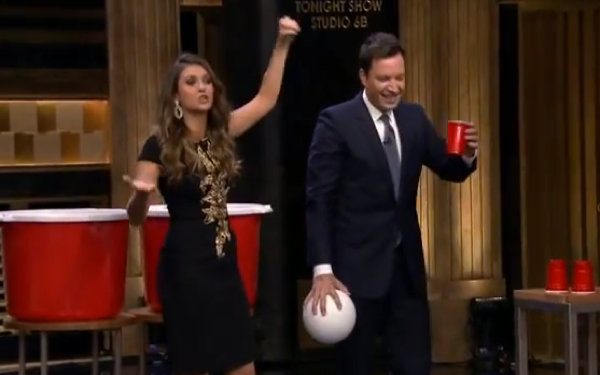 That's right: GIANT BEER PONG. It was so epic.

Using giant ping pong balls (which Dobrev disputed were actually volleyballs) and huge red solo cups, the two took turns bouncing the balls into the cups. After someone succeeded in putting a ball in a cup, the opponent had to gulp down a cup of beer. The first one to make three shots won.

It's tempting to underestimate Dobrev's beer pong skills (she honestly doesn't seem like the type of girl who even likes beer), but you might be surprised by how close the score gets.

After watching the clip above, see if you can resist Googling how to purchase a giant beer pong set to have at your next fraternity party, because let's face it: regular beer pong seems so boring now.