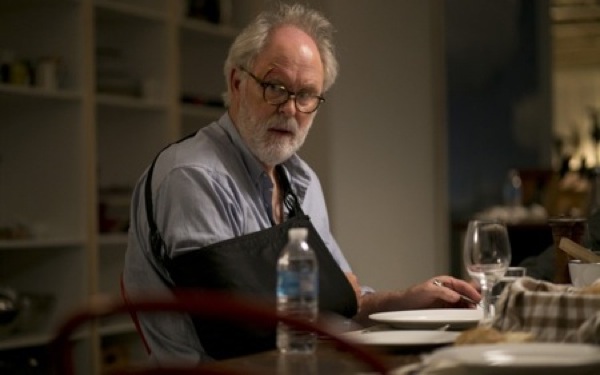 To make something strange is to make it unique, separate from the rest—unpredictable even. And what is more unique, more unpredictable than being in love? For director Ira Sachs, the answer is quite simple: nothing.

Love is Strange, the independent director’s latest foray, delves into the simple complexities of relationships.

Riding off the high of his own recent marriage, Sachs (Keep the Light On, Married Life) illustrates his most positive assertion of love yet by introducing us to Ben (John Lithgow) and George (Alfred Molina), a same-sex couple of—despite the trend of today’s divorce rate—40 years. When George gets fired from his job, they are forced to leave each other’s side to crash on separate friends' and families’ couches. From then on, instead of pining for moments of heartache and tragedy, Sachs depends on the normality of the minor bumps in the road, ones often looked over as insignificant.

Claiming Sachs’ script is the best he’s read since the Oscar-sweeping Terms of Endearment (1983), one of the film's stars explains, “The crises of their story are the little, modest domestic stories of life. But they are so real; I just know that this is the stuff an audience will so powerfully identify with.”

This high praise comes from Lithgow (Shrek, "3rd Rock from the Sun," "How I Met Your Mother"), the world-renowned character actor who has graced every dramatic arena imaginable, starting with theater. In fact, both him and co-star Molina (Spider-Man 2, Raiders of the Lost Ark, Chocolat) began their luscious careers on stage. So, you‘d think that by toting such résumés, as well as having a story that relies on the deep-rooted and tender connection between the two men, Sachs would have Lithgow and Molina work somewhat closely with each other to create the foundation for such a bond, à la Blue Valentine (2010).

But you’d be wrong.

“[Sachs] spent two days with me and two days with Fred [Molina], going through the script line by line, talking in great detail, working out the back story of the characters, taking facts of my history and Fred’s history, and putting them to work in the characters… He didn’t want us together until we actually were on set with each other, and that’s just how he likes to work,” says Lithgow.

While Lithgow admits this was at first uncomfortable for the theater actors who tend to rely on rehearsal and practice, he concedes to Sachs’ vision of trusting one another to fall into character rather than to perform it.

Compared to his previous films, many of which also focused on the trials of same-sex relationships, Sachs does not yearn to make a political statement. What he strives for instead is far more challenging: to capture the all-encompassing notion of love regardless of sexual orientation.

“Ben and George are gay men who get married in an era when gay marriage is a huge deal, so of course it resonates because it’s part of the zeitgeist… but it’s not polemical," argues Lithgow. "It doesn’t deliver a message. It’s just a frank look at love and love in its various transmutations.”

Power walking down the street flustered, trying to catch the bus; looking into each other’s eyes for so long and then suddenly looking away because they just might burst; dealing with the awkwardness of family politics—Ben and George’s love is universal, while its nuances are endearingly unique.

“[Sachs] wanted to look at a happy relationship and his own ideal future, and he found this marvelous story, which is not a completely happy story, of course; they’ve been wrenched apart, they have to live apart, and it’s agony—but the fact that it’s agony is precisely why they’re so lucky,” says Lithgow. “How wonderful is it to have a relationship that’s so important to you that it’s absolute agony to be away from each other?”

Even then, Love is Strange doesn’t limit its scope to the love between two people. From having a love affair with a city, to finding one’s own sexuality as an adolescent, to admitting you still need help as a grown man, Sachs connects love to even the smallest happenings of our everyday lives, which makes him quite the romantic.

As Lithgow further explains, “What makes [Love is Strange] so extraordinary is how ordinary it is. To describe it to people you can forgive them for thinking 'Well, what’s the big deal?' It’s a very modest film in terms of action and event, but somehow it weaves a spell.”

With a little less kissing in the rain and fewer lost love letters in the mail, Sachs and his cast of lovers bring an unassuming romanticism to a modern day love story that one day may not seem so strange after all.