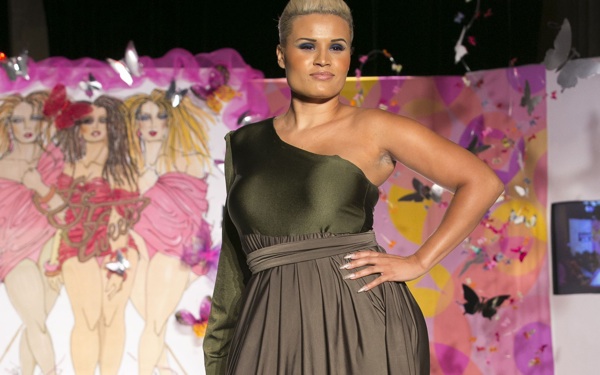 (MCT) Everybody needs clothes, but clothes aren’t always designed to flatter every body.

In the United States alone, more than half of women identify as plus-sized, which typically means they wear a size 14 or larger. Yet their spending traditionally has accounted for less than a quarter of women’s clothing purchases, largely due to apparel options that are deemed poor in fit and quality or unimaginative in their style sense.

Now designers are elevating their creations for ladies with curves — and it’s showing. According to a recent NPD Group report, the plus-sized women’s clothing category has grown 5 percent from last year. It generated $17.5 billion in the 12 months that ended in April, up from $16.7 billion in sales during the same period the previous year.

“There’s just opportunity across apparel, even intimates as well, to capitalize on that,” says Nicole Haase, senior director of merchandising at Pittsburgh-grown e-retailer ModCloth. July marked one year since the business expanded its plus offerings. In that time, plus sales have doubled and are the company’s fastest-growing segment.

Rather than just introducing a plus clothing collection, ModCloth chose to work with vendors to offer “extended sizes” for pieces also carried in straight sizes. So a dress that comes in a size 2 or 4, for instance, would also be available in a size 22 or 24. This approach provides for a more inclusive shopping experience for consumers, Haase says, instead of making women with curves choose from their own group of clothing styles.

Encouraged by its initial success, ModCloth has teamed with New York-based style blogger and Marie Claire contributing fashion editor Nicolette Mason on a collection of dresses, tops and bottoms in sizes XS through 4X that will be available at www.modcloth.com in October. ModCloth also plans to direct more attention to improving its extended sizes for pants and tops.

Meanwhile, other brands have created websites that are set up exclusively for plus-sized apparel. Earlier this year, the revamped Eloquii.com launched a website stocked with trend-inspired styles. It initially existed under the retail chain The Limited as a plus-sized sister brand but was shuttered not long after it started in 2011.

“There was so much outcry among the customers saying, ‘Once again no one has given (a plus) business a chance,’” says creative director Jodi Arnold. Much of the team stuck together and ventured out on its own.

Like ModCloth, Eloquii.com strives to squash the stigma often associated with plus-sized style by branding its business as “a fashion site that happens to cater to sizes 14 to 24,” Arnold says. It also tries to fill the void for trend-focused, sophisticated fashions for fuller figures by debuting new collections every two weeks.

More and more plus-centric brands are looking to the runway when shaping their collections. In the fall, plus clothing chain stalwart Lane Bryant will debut its new 6th & Lane line, flavored with runway fashions including structured moto jackets, vivid prints, leather skirts and sexy sheath and mini dresses. Lane Bryant also has received rave reviews in recent months for its collaborations with Isabel Toledo, widely known as the designer behind the sparkling yellow dress with coordinating overcoat that Michelle Obama wore to the first inaugural parade in 2009. More designs by Toldeo for Lane Bryant are expected for the fall.

Pop culture figures and celebrities are pitching in, too. Fashion consultant and television personality Tim Gunn of “Project Runway” has expressed an interest in having a season with plus-sized models on the reality TV show. Since 2009, multiple days of runway shows in New York City have been held as part of Full Figured Fashion Week, which showcases the beauty of everyday women and designer fashions for them. Actress Melissa McCarthy also has been very vocal about her struggles to find designers willing to dress her during awards season.

“When I go shopping, most of the time I’m disappointed,” she told Redbook in a recent interview.

Putting to work some of what she learned during her stint at the Fashion Institute of Technology, she is working with friend and couturier Daniella Pearl on a plus collection called Pearl.

“It’s so amazing to see how far (the industry has) come,” says Pittsburgh-area blogger Mandy Fierens, 25.

Five years ago, she started writing about looking for attractive, stylish plus fashions on her website, TheCurvyBlogger.com.

“I would get all of these emails saying, ‘I had a similar experience in my life, and you’re inspiring.’? That was such a big surprise back then.”

Nowadays she authors the occasional body image blog post and uses the site mostly to display inspirational photos and fashion shots. She also does some modeling on the side, including for ModCloth, in between her full-time work as a wedding photographer. She is a “huge thrifter,” she says, and likes to makeover her finds into fashions fit just for her. She also lists ASOS’ Curves collection and the online Hey Gorgeous! boutique among some of her favorite places to shop.

There’s still room for improvement, though.

“I think when it comes to stores that just started carrying plus sizes, I think they’re still trying to figure out what the plus-sized customer wants,” Fierens says. “They’re treating her differently.”

A recent ModCloth plus fashion survey of more than 1,500 women across the country found agreeable results: 77 percent said they have a difficult time finding well-fitting outfits, and most picked words such as “frustrated” and “excluded” to describe their shopping experiences rather than more positive ones such as “excited” and “comfortable.”

But as more brands recognize the growth potential that lies in listening to — and satisfying — the desires of a range of sizes and body types, things will continue to get better — one dress, pant and shirt at a time.