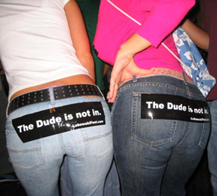 Started in the fall of 2002 by Will Russell and Scott Shuffitt, two avid fans of the 1998 Coen Brothers’ flick The Big Lebowski, Lebowski Fest West is a fun event designed to celebrate the film while uniting its "Achiever" fans.

The new L.A.-based installment of the "traveling fan festival" will kick-off Friday evening, March 3 at Hollywood’s Knitting Factory with appearances by some of the film’s lesser-known cast, including Lu Elrod, Jim Hoosier and Robin Jones. The biggest fan-centric aspect of the opening night party, though, is the joint appearance of the two men who provided the inspiration for Lebowski’s two main characters: Jeff Dowd (the inspiration for Jeff Bridges’ "The Dude") and Peter Exline (who influenced John Goodman’s "Walter").

The Knitting Factory festivities will also include zydeco music by Eddie Baytos with special guest Edie McClurg (Ferris Bueller’s Day Off) playing washboard, and the musical stylings of Autobahn (the film’s fictional techno group), Neu Tickles, One Tribe Nation and more. There will be White Russians aplenty, and the party will be followed by a midnight screening of The Big Lebowski.

The festivities will continue on Saturday, March 4 at the 68-lane Cal Bowl with bowling and various contests (costume, trivia and others), along with appearances by Dowd, Exline, Hoosier, Jones, McClurg and the film’s bowling consultant, Barry Asher.

The Knitting Factory is located at 7021 Hollywood Blvd., Suite 209, in Hollywood. The party at the Knitting Factory begins at 8 p.m. and admission is $15 per person. Cal Bowl is located at 2500 E. Carson St., in Lakewood. The event at Cal Bowl is from 8 p.m. – 1 a.m. and admission is $25 per person (includes bowling, if available, and show rental). Tickets are available at TicketWeb.com and www.LebowskiFest.com.
Article posted on 2/27/2006
This article has been viewed 2718 times.