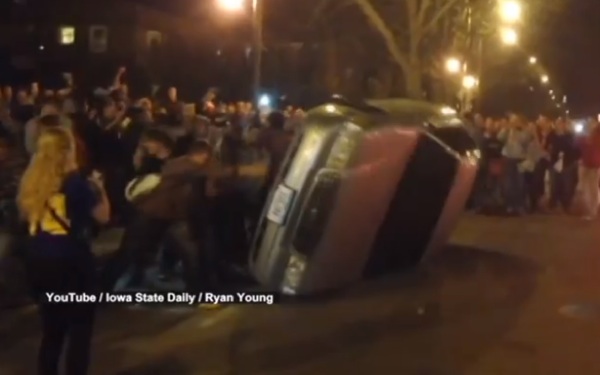 Remember when the students at Iowa State University were out of control and caused a riot during its historic Veishea campus celebration back in April? Students overturned cars, launched beer bottles and other objects at the police, tore down light poles, and one student was critically injured.

So, it's not surprising that the campus festival has been canceled forever (via Cosmopolitan).

According to the Iowa State Daily, ISU president Steven Leath said, "I understand that it's very sad and disappointing for most of us to see a 92-year-old tradition come to an end. And there are going to be some that are upset with this decision, but I’m not going to continue to put students at risk so we can observe what to many has become a weeklong party.”

The announcement came after a task force recommended that Veishea should no longer continue.

Veishea began in 1922 as a school pride celebration to honor the different programs at the school (Veterinary Medicine, Engineering, Industrial Science, Home Economics, Agriculture). Although the weeklong festival was alcohol free, students looked at it as an excuse to drink heavily.

"The true purpose of the university celebration has been completely overshadowed by this new culture," Leath said.

The first disturbance to occur during Veishea was in 1985, and riots broke out in 1992 and 1994. In 1997, a person was stabbed to death. In 2014, there were "more than 200 arrests, nearly 250 citations or charges were issued and nine students were suspended," according to Iowa State Daily.