Found-Footage Film Into the Storm is Exciting, But it isn't Convincing 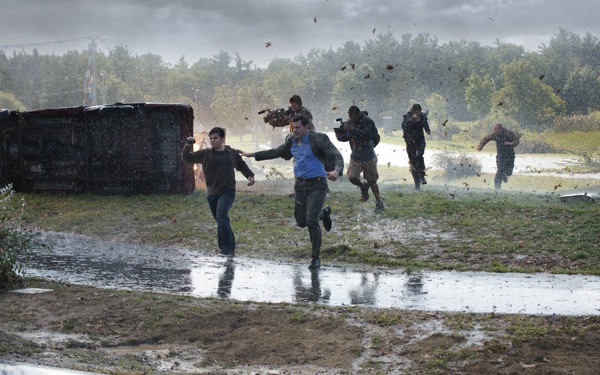 I love a good found-footage film as much as the next gal (especially the horror hit V/H/S), but filmmakers should have stuck to standard storytelling in the thrilling, adrenaline-pumping disaster film Into the Storm, which is about multiple catastrophic cyclones mercilessly ripping through a town.

The film starts out with vice principal Gary (Richard Armitage) and his two high school boys, Donnie (Max Deacon) and Trey (Nathan Kress, “iCarly”) getting ready for high school graduation. Trey and Donnie are in charge of the video time capsules, so they interview students and people around town. There’s some underlying tension between Gary and Donnie—unresolved father-son drama we don’t really care to dive into—so, when Donnie seizes the opportunity to help out his crush, Kaitlyn (Alycia Debnam Carey), with her film project, he ditches the graduation ceremony to hang out with her. Little does he know a huge storm is heading their way…

And then you have a team of storm trackers, who clearly know something disastrous is coming: Allison (Sarah Wayne Callies, "The Walking Dead"), a single mother and expert on tornadoes; Pete (Matt Walsh), an arrogant yet humorous man who only cares about catching the twisters on camera, no matter what the costs are; Jacob (Jeremy Sumpter), a cameraman and college student who’s along for the ride because he needs the cash; and Daryl (Arlen Escarpeta), another cameraman and the guy who dragged Jeremy into this job. Together, they bark at one other and risk their lives in order to videotape this once-in-a-lifetime natural disaster.

Shooting Into the Storm in first-person sounds like a good idea, and in truth, this is perhaps what gives the film its wow-factor. The combination of the booming sounds, amazing special effects and sometimes-shaky camera movements gets the audiences’ hearts pumping. We stop breathing when the malevolent tornado wipes through buildings and cars, and a fiery twister sucks up a victim. It’s exciting, nerve wracking and just plain fun to watch.

But, we have to remember that the only reason why we are seeing any of this footage is because the characters all have video cameras. This is where Into the Storm loses me; it’s unconvincing. I mean, okay, so obviously it makes sense why the storm chasers have their cameras rolling the whole time, but everyone else? No. Freakin’. Way.

There is no way a teenage boy who is about to drown would still have his camera on and rolling the whole time. And there’s no way his brother would film his dad hanging onto a car door, trying not to be sucked into a vicious twister. And I’d be damned if a saw a young man walk willingly within a few feet of a red, hot, fiery tornado with his hand glued to his camera. There is no way any of that would happen in real life.

Into the Storm fails to provide realistic reasons why these characters (and even some of the storm chasers, as we get further into the film and the characters realize their lives are not worth their careers) venture off into the storm and manage to hold onto their cameras. This nonsense makes it hard for the viewer to truly get lost in the film.

It would have been more interesting, however, to see what movie we would have gotten if the director opted for filming in the third-person instead. Surely, it still could have been exciting, nerve wrecking and fun to watch.

As for the acting? Meh.

Some of the lines were corny (can’t really blame the actors for this, though), and the ending was just a little too cheesy for my taste. However, I will say it was nice see “The Walking Dead” star, Callies, on the big screen (we miss you, Lori!).

But overall, no one stood out, and no one gave a jaw-dropping performance; the tornadoes were the stars of this film.

Into the Storm is now in theaters.