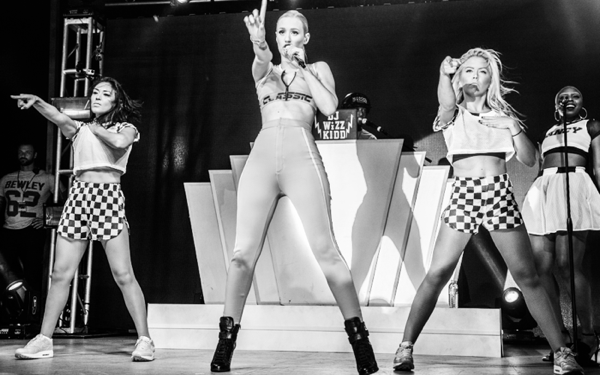 Many twenty-somethings, including students, took advantage of this free concert, but there were also families, young girls and the occasional sitcom star or two spotted in the crowd. Everyone in attendance enjoyed the full-on “party” atmosphere that lasted for about three hours.

Opening act Magic!, a Canadian reggae fusion band, set the upbeat and dance tone for the night. However, it was British singer-songwriter Rita Ora who really got the crowd ready for Australian rapper Azalea, who has exploded in the U.S. hip-hop scene with hits such as “Fancy,” “Work” and appearing on pop singer Ariana Grande’s “Problem.”

Ora bounded to the stage with her blue hair braided and loose in a pony tail and her back-up dancers following close behind. Her high-energy music, dancing and crowd involvement kept the audience alive and moving. In fact, watching people dance was as almost as fun as watching the singer perform! Though they might not have been the most skillful dancers I have ever seen, these fans were smiling and grooving, clearing having fun and letting the music take over.

After a powerful performance from Ora, it was time for the main event: Azalea. Screams and chants of “Bad B*tch!” greeted the rapper when she came on stage, wearing a bright pink speed racer outfit that was, it seems, made to specifically accentuate her rather signature booty.

Beaming her pearly whites at the crowd, Azalea broke into her lyrics, keeping an insanely fast pace without any trip-ups—no wonder she has been nominated for seven MTV Video Music Awards this year. And of course, every time she turned her back to the audience, there was a loud, appreciative cheer.

Later that night, Ora came back to the stage to sing along with Azalea in the last moments of her set. They seem to have plans to keep up their duets, which would be a great idea; the two complement each other on “Black Widow,” which can be found on Azalea’s The New Classic.

Enjoying a night on the beach is the perfect ending to a summer day in L.A.; attending a free concert with Ora and Azalea as the headliners is the cherry on top.

Live Show Reviews
So good, so good! At SoFi Stadium, fans celebrate a real, live concert and a worthy cause
1,001 views

Live Show Reviews
Beyoncé’s Coachella performance was incredible — and she knew it
3,203 views