Zom-Com Life After Beth Alive with Humor, Thanks to Cast's Comedic Chops 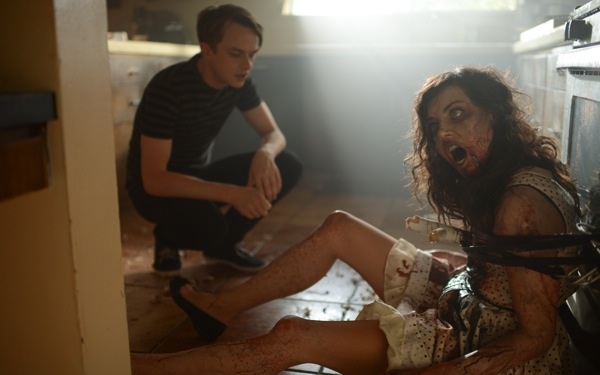 Life After Beth
(Credit: A24 Films)

Losing a girlfriend can be tough. Having that girlfriend come back as a zombie may be a bit tougher, and as Life After Beth proves, much funnier.

The old adage “love conquers all” takes on a whole new meaning as Zach’s (Dane DeHaan) recently deceased girlfriend Beth (Aubrey Plaza) unexpectedly rises from the grave unaware of her untimely death and ready as ever to be Zach’s girl. While at first it seems too good to be true, a second chance at love and all, Beth quickly shows that she may have picked up a few quirks when she was 6 feet under that Zach is unprepared to handle, like potentially being on her menu.

While it may be his directing debut, writer/director Jeff Baena is no stranger to the world of dark comedy, having co-written the cult hit I Heart Huckabees (2004). It’s undeniable that the man has a knack for the somewhat offbeat, but Life After Beth marks a much more accessible and mainstream approach for the new director.

And who better to take on the role of a ravenous yet adorable zombie gal than Baena’s real-life girlfriend Plaza? Known for her macabre dry humor on “Parks and Recreation” and pretty much everything else, it’s hard to imagine Baena writing the script without her in mind for the role. Even her overtly monotonous voice seems to fit the bill, where she says something potentially horrific but then flashes a quick smile, and suddenly you can’t quite tell if it’s all a joke or not. Plaza isn’t the next Meryl Streep, but she’s certainly becoming a solid character actor.

Meanwhile there’s DeHaan (The Amazing Spiderman 2, Kill Your Darlings), who usually embodies dark, despondent characters. However, the role of Zach calls for a much lighter performance and, as a fan of DeHaan’s work, it appears he was a bit out of his comfort zone. Admittedly, when the subject matter darkened, DeHaan’s charisma improved, but there probably could have been a better person for the role.

Better people, however, could not have been chosen for the roles of both Beth’s and Zach’s parents. From John C. Reilly (Stepbrothers) and Molly Shannon (“SNL”) as Beth’s hopelessly in-denial parents, to Cheryl Hines (“Curb Your Enthusiasm”) and Paul Reiser (“Mad About You”) as Zach’s typical suburbanite parents, Baena stuffed his film with incomparable comedic chops. Nonetheless, all of the comics seem under utilized. Reilly and Shannon do have a handful of sparkling moments, but in the end there were plenty of lulls that missed their uncanny sense of timing.

These lulls become the ultimate problem for Life After Beth, denying it the opportunity to be truly memorable. I don’t mean lulls in action or in rising stakes; I talking about in the film’s heartbeat.

Other successful zom-coms such as Shaun of the Dead (2004) and Zombieland (2009) seamlessly flow between the dark and the comedic with a tangible zeal and a passion that lacks in Baena’s take. They hold a true knowledge of zombie movie tropes and use that to create something ridiculous. As a result, they become ridiculously hilarious. Baena wanted to cleverly spin the zombie and rom-com themes, yet his final product lacked the heart of either to be thoroughly convincing.

For Life After Beth, the concept is there, the actors are there, but it’s in Baena’s own storytelling where there is more to be desired, perhaps relying too much on the onscreen talent to carry the plot. While I love seeing Plaza rock the crazed zombie outfit, punching holes through walls in her sundress, the rest becomes far too muted to keep up with her voracious appetite.