5 Artists to Watch at this Year's F*ck Yeah Fest! 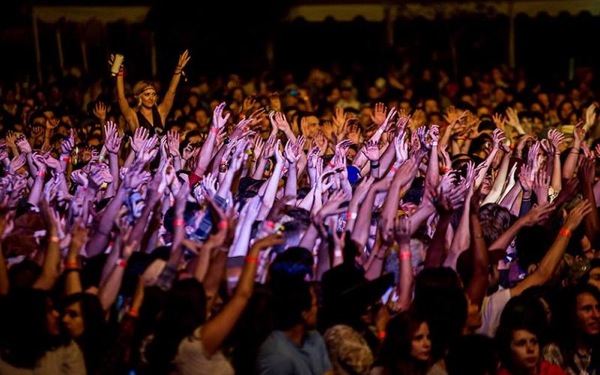 The F*ck Yeah Fest (FYF) at the Los Angeles Sports Arena and Exposition Park is almost here (Aug. 23-24), and while we are all super stoked to see headliners The Strokes and Phoenix, there are a lot of other bands and artists on the lineup that are set to play some awesome shows.

Angel Olsen (Saturday, Aug. 23)
If you want to sway slowly with your eyes closed in a crowd of folk and indie rock lovers, make sure to catch Angel Olsen’s performance on Saturday.

A native to St. Louis, Mo., Olsen is a singer that has been gaining a lot of recognition for her warm and touching, yet haunting voice. She and her band create a type of music that is introspective, somewhat dark and speaks to the reality of life.

With her recent release of her new album Burn Your Fire for No Witness, Olsen has been on the radar in the indie music world with sold-out concerts and recognition from Vogue and Spin. Before going solo and finding a band to create what she views as a “louder sound,” she performed with Will Oldham’s Bonnie Prince Billy and the Cairo Gang.

To get a taste of her music, check out “Hi-Five” and “Lonely Universe” (which is from her debut album Half Way Home).

Donning charro suits that they bought in the Mariachi Plaza in East L.A., these guys play music that is a fusion of alternative rock and mariachi. A complete break from its first band, Mariachi El Bronx moves from its punk, loud and harsh sound as the The Bronx to a slower, melodious music with English lyrics, long ballads and sounds found in any mariachi band.

The Bronx decided to create an alter ego when it was asked to perform an acoustic version of a song for a TV show. When the band members were deciding on which song to play and how to play an acoustic version of it, they thought it would be fun to use mariachi instruments for the performance. Since then, the band became interested in the Mexican folk music, and Mariachi El Bronx was born.

Check out the songs “48 Roses” and “Revolution Girls” to hear its unique sound. Catch them on Saturday and The Bronx on Sunday.

Although they’re from the Midwest, this band has beach-y, echoe-y tunes akin to bands such as Wavves and Best Coast. But, they just don’t stop there. Twin Peaks' music is upbeat and has an old rock ‘n' roll sound that’s fun to dance to.

All 20 years old, Connor Brodner (drums), Jack Dolan (bass), Cadien Lake James (guitar) and Clay Frankel (guitar) met while growing up on the streets of Chicago. They came together to form Twin Peaks when they were in high school and almost ran into a little bit of local band drama when Frankel was two-timing his first band with Twin Peaks.

If you’re looking for a new band to check out at FYF, this lo-fi rock band is a group that you should definitely watch. Listen to songs “Baby Blue” and “Stand in the Stand,” and check out recently released album Wild Onion.

Les Sins (Sunday, Aug. 24)
Take a break from rocking out, and listen to some EDM at Les Sins’s performance on Sunday.

Well known for his act as Toro Y Moi, recording artist and producer Chaz Bundick (aka Les Sins) launched this dance project a couple years ago as a side-act. Stepping away from the chillwave that can be heard in Toro Y Moi, he creates a type of music that sounds like it would fit in at a European EDM club.

Although Bundick's songs are all electronic, they have a wide range of sounds. From funky and R&B tunes to songs that have a deep house feel, his music never gets boring or repetitive. “Grind” and “Fetch” are some of his fans’ favorites.

Last April, Portner formed this band as a side project with keyboard player Angel Deradoorian (former member of Dirty Projectors) and drummer Jeremy Hyman (Ponytail). Portner’s vision for the band was to create a project that recreates the appeal of old songs such as “Monster Mash” and “They’re Coming to Take Me Away, Ha Haaa!”

In an interview with Pitchfork, Tare said his band creates music that shows the “fun side of horror.” And it's true. It’s catchy, cheery—it’s something that you can dance to. If you’re looking for a show that will have you jumping around and being silly, you’ll have a great time watching Avey Tare’s Slasher Flicks.

To listen to its tunes and watch some trippy videos, check out “Little Fang” and “Strange Colores.”