Boxer Victor Ortiz Talks Transitioning into Acting for The Expendables 3 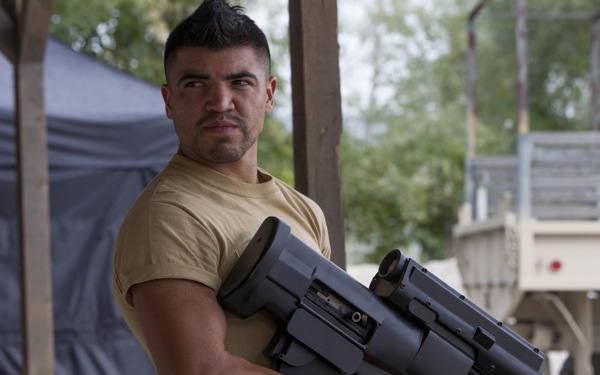 The gang is back and with some fresh faces.

In the third installment of Sylvester Stallone’s The Expendables franchise, we find Barney Ross (Stallone) trying to retire the old team and recruit a younger generation after Expendables’ member Hale Caesar (Terry Crews) is critically injured.

We were lucky enough to sit down with one of the newbies, Ortiz, and discuss how the champion-winning boxer landed his first role as a weaponry specialist in this blockbuster franchise.

Despite his nickname, "Vicious," Ortiz is kind, polite and even a bit playful. When asked how he delved into acting, he explained, “It’s interesting; it’s new, you know. But more than anything I’m enjoying it. It’s one of those things where it kind of just happens, and I kind of fell into it.”

He recounted his fight with Josesito Lopez two years ago at the Staples Center, which ended in Ortiz having his jaw snapped in half. Ever the optimist, the boxer didn’t let this bring him down, though.

“I took that and said, 'You know what? Maybe this is a sign that I need to take a break for a little while and open some new horizons and try something,'" he revealed. "Since I was 17 [...] I’ve had never had a break, I’d never gone out of my way to have a long vacation and do something. I’ve always been on the go, on the go […].”

Stepping outside of the ring and someday hoping to be in front of a camera, Ortiz  “got into acting classes, because I just had a feeling that maybe I had something about me that I could go into acting while my jaw heals.” The next thing he knew, he was on the 16th season of "Dancing With the Stars," which opened up the doors to The Expendables 3, as well as his second movie, Southpaw.

“I’ve never acted in my life, and to make my acting debut in such a big move, huge cast like this […] my utmost respect for Mr. Stallone,” said Ortiz.

Besides the role of Mars, Stallone also gave Ortiz what he calls “a little dream to believe in,” back when we got to know the actor in Rocky. It was the movie that spoke to the boxer, whose childhood held many struggles but also led to great success.

These days, we don't hear that many stories about boxers becoming actors. However, there are quite a few professional fighters and martial artists who have successfully made the transition and have become standout actors: Chuck Norris, Bruce Lee, Mike Tyson and Gina Carano are just to name a few.

For Ortiz, he found that boxing and acting actually have a lot in common, since both require mental focus. “Your mental state of mind has to be clear at certain times […] you have to have a balance of certain things,” he said.

Although Ortiz does have one gripe with The Expendables 3 (he wasn't able to do his own stunts), he encourages everybody to go watch it when it releases Friday. If you don’t, he warns he “will come find you; I’m a weapons specialist."