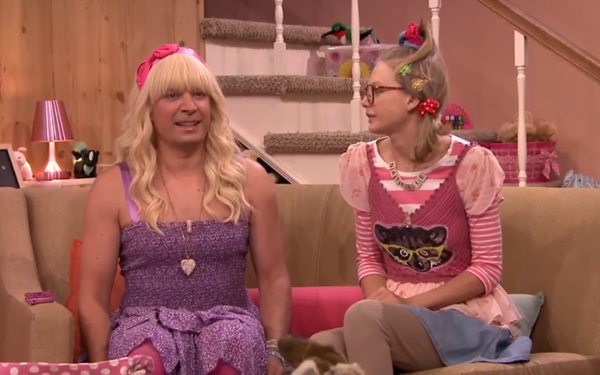 Wednesday night's "The Tonight Show" with Jimmy Fallon featured the Teen Nick skit, "Ew!" Past skits featured Zac Efron, Channing Tatum, Will Ferrell and even First Lady Michele Obama, but country-pop superstar Taylor Swift sat next to Fallon on the couch this time.

Dressed very un-Taylor Swift like, the "22" singer donned braces, glasses, '90s scrunchies and barrettes, and multiple layers of clothing, including a pink tank top with a glasses-wearing raccoon (?) face stitched on the front.

The singer/actress held her own, introducing herself as Natalie who likes to eat apricots, collect Band-Aids and build Popsicle stick castles. She revealed she hasn't been allowed to watch TV since Miley Cyrus' notorious MTV VMA performance, and she joined Fallon as he danced to Selena Gomez's "Come & Get It."

Sure, it wasn't as funny as Tatum's or Efron's skit, but it's always great to see a prissy pop star let loose and act silly every now and then.

Check out the "Ew!" skit above!

TV Time
Regina King has been on the road to ‘Watchmen’ for 25 years. She has no regrets
403 views

TV Time
‘The Marvelous Mrs. Maisel’ characters must ‘figure out how and where to land,’ Tony Shalhoub says
307 views