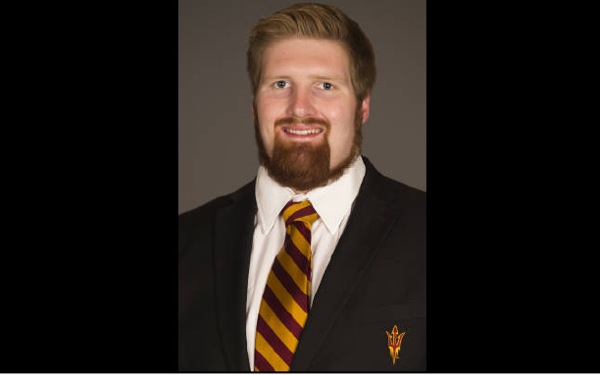 Arizona State lineman Edward Sarafin revealed to Phoenix-based magazine Compete that he is gay. This makes him the first Division I football player to publicly come out, reports the Associated Press (via New York Daily News).

According to the magazine, Sarafin (aka "Chip") began telling his teammates about his sexual orientation last spring and that "it benefited my peace of mind greatly."

It seems that the Sun Devil football community is supporting Sarafin, who is is currently pursuing an undergraduate degree in biomedical engineering and a master's in the same field.

"The entire athletics department is extremely proud of Chip and is unequivocally supportive of him," said Arizona State athletic director Ray Anderson in a statement.

Head football coach Todd Graham said, "We are a brotherhood that is not defined by cultural and personal differences, but rather an individual's commitment to the Sun Devil Way."

He continued, "Diversity and acceptance are two of the pillars of our program, and he has full support from his teammates and the coaching staff."

On Twitter, Collins wrote, "Congratulations @ASU football player Chip Sarafin. Best of luck to you and your teammates this season, except against @Stanford. #pac12pride."

Sam also congratulated Sarafin via Twitter with, "Congratulations Chip Sarafin for having the courage to be yourself. Wishing you and your teammates much success this season. #courage2014."