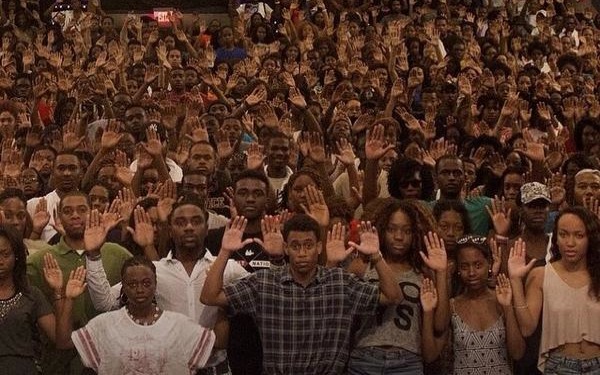 Howard University students pose with their hands in the air.
(Credit: Twitter/@The_Blackness48)

They say "a picture is worth a thousand words," and this photo speaks volumes.

In the photo, hundreds of Howard University students during freshman orientation are posing with their hands in the air, protesting against the shooting of Mike Brown, an unarmed African-American Ferguson, Mo. teen who was gunned down Saturday night.

Megan Sims, a junior at the historically black college in Washington, D.C., shared the photo Wednesday via Twitter. At the time of this posting, it has been retweeted more than 8,800 times.

"We had the option to opt out of the picture, but I chose to get involved because this is a very close issue to my heart," Sims told Buzzfeed.

The photo has become a symbol of solidarity, a peaceful protest against police brutality.

Brown's death has sparked national attention and outrage, very similar to the 2012 death of 17-year-old Trayvon Martin. Police say Brown was involved in an altercation or scuffle with police, but witnesses say Brown had raised his arms before officers shot him.

"The issue is bigger than Michael Brown [...] I feel like it's become apparent in this country that black men, for the most part, are being targeted by police officers," Sims said, according to USA Today.

NBC Washington reports Saadiq said Howard students feel passionately about the shooting and "we just really wanted to get some positive media circulating about what people are doing in light of what's happened."

He continued, "This man was in the least dangerous position you can be in, signifying that I don't want to get into a violent altercation. I'm innocent. I don't have a weapon. That normally signifies for the officer to approach, not to shoot."

However, police have not confirmed if Brown did raise his hands.