Steve Coogan and Rob Brydon Reunite in The Trip to Italy 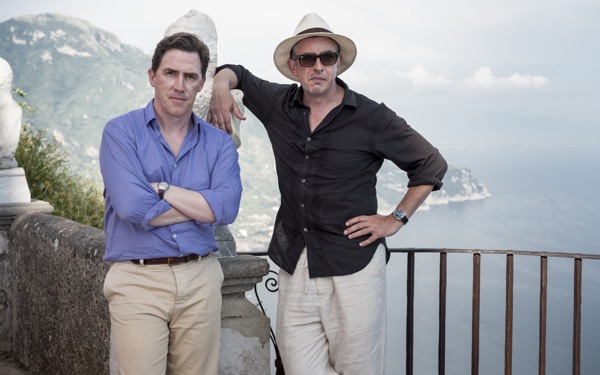 After a grand tour of gallivanting around Northern England, eating, drinking and impersonating till their belts grew tight, it seems 2010’s The Trip was merely an appetizer for comedians Steve Coogan and Rob Brydon. Now, they're setting their sights on Italy's vineyard-lined hills with the promise of new territory, new food and new women seeming too good to pass up. Unfortunately, for The Trip to Italy, the comics’ eyes may have been bigger than their stomachs.

Lightly following the steps of the Romantic poets of Italy, occasionally getting deep about la dolce vita, the boys are back at it, cruising in their Mini Cooper with an Alanis Morissette CD blasting, bickering yet again about each other’s semi-successful careers and who can do the better impression.

Still with little-to-no knowledge about food or wine, Coogan even voices why The Observer would ever want them to do another article, because really, could anything be as good as the original? While he then goes into a witty tangent about his qualms with sequels, director Michael Winterbottom’s revisit to the world of Coogan and Brydon’s love-hate relationship is, simply put, more of the same.

Just with that brief mention of sequels, we know that the filmmaker and comedians were cognizant of the potential disaster of doubling up. While by no means a disaster, Coogan (Philomena, Alan Partridge) and Brydon (Lock, Stock and Two Smoking Barrels) don’t heed their own advice: they take what works from the first and enhance it into something better. The same jokes, the same impersonations, the same slight irreverence towards women, The Trip to Italy begins to take the form of an echo. But even with their amazing Michael Caine impressions, it seems somewhat of a copout to do it again.

Where it did succeed is the tracing of the comedians’ personal lives, which have evolved since the last time we saw them. With Coogan (mostly) giving up alcohol and Brydon auditioning for a big Hollywood film, these moments of semi-fictionalized character development make the film stand out as a more narrative driven-piece than it really is.

There is also a new air of macabre that both comedians and Winterbottom bring out. Donning more gray hairs than four years ago, the men visit the catacombs, stand on the beach listlessly, wondering what people will think of them when they die. Again, these moments add the much-needed weight and depth to The Trip to Italy.

Unfortunately, those quiet moments are vastly overrun by the constant bantering and squabbling that goes on between Coogan and Brydon. There’s only so much screen time impersonation battles can take before it becomes something reminiscent of white noise, where the film starts to lose any real purpose or direction.

Having directed the TV series on which both films are based, Winterbottom lost something in translation. The visual setup is perhaps more adaptable for film, with Winterbottom’s camera capturing the sweeping landscapes of Italy in a properly romantic way. However, the narrative is much better suited for TV, where Coogan and Brydon’s impersonations and wit can be consolidated into shorter formats.

But still, denying Coogan and Brydon’s talent for impersonating and putting each other down in delightfully awkward ways would be a mistake. And Winterbottom is a great counterpoint to the two, casting them into picturesque settings that only the Romantic poets that they follow would understand.

The Trip to Italy releases in Los Angeles at The Landmark on Friday, Aug. 15 and at the IFC Center and Lincoln Plaza Cinemas in New York City.