A Movie Role Forces a Young Actress to Think About the Future, Death 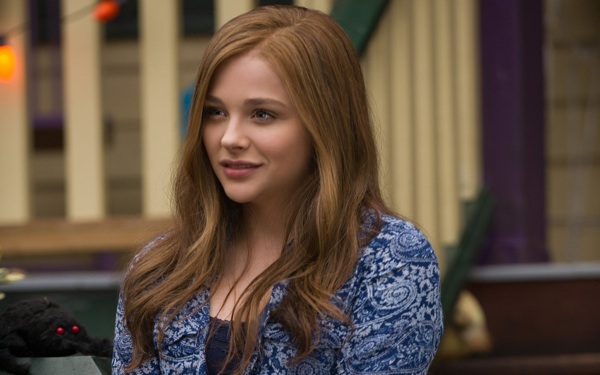 (MCT) MIAMI BEACH — Chloë Grace Moretz is spending a lot of time pondering life’s transitions. At 17, it’s not too soon for her to wonder about that generally awkward leap to more adult roles. For every Emma Watson, gracefully continuing her career into her 20s, there are five Amanda Bynes, and Moretz has to know that.

“I’ve done this (acting) for the past 12-13 years of my life,” says the star of Carrie and Hugo says. “It’s my love and my passion. It’s my one, true calling. I wouldn’t give it up for anything in the world. But at some point in my life, maybe in the next two years, I would like to go to a film school and learn cinematography and editing. I am fascinated by the technical side of the business.”

And her new film has had her mulling over the BIG transition — life to death and what might come after. If I Stay (in theaters Aug. 22), based on Gayle Forman’s young adult novel about a comatose teen who faces the stark choices of life or death, forces issues of mortality on an age group that is famed for thinking itself immortal.

“You don’t think about how unexpected death is at that age, my age,” she says. “In this movie, we just get in the car and bad things happen. ... My character’s listening to music, the voice-over is a little ominous. And then BAM. It’s as quick as when it happens in real life. ... Life doesn’t usually have this big build up until death. It’s sudden.”

Moretz’s character, Mia, is an aspiring cellist with a shot at Juilliard, a teen girl in love for the first time (Jamie Blackley) with an adoring, indulgent family. But Juilliard damages the romance. A car accident leaves her in a coma, and as her spirit wanders through flashbacks and the halls of that hospital, she pulls together reasons for giving up as well as things that might make her fight to live.

“Bring it down to a baseline that we can all see — that common denominator of loss,” Moretz says. “We can all, no matter how young we are, connect with losing someone or something and grieving over it. Even a little kid gets that. ... In love, it’s so fleeting when you’re my age. You get that high, you’re in that romantic high, on the top of a mountain. And then it’s gone — just like that, in a flash, it’s suddenly gone. You’re careening down off that mountain on your way down to Earth.

“Tragic love stories pull us in because of that high and the low that follows. It gives them that much more impact.”

The daughter of an Atlanta plastic surgeon and a nurse, younger sister to an actor and acting coach, Moretz has seemed destined for at least child stardom from the start. Making her mark in films such as Kick-Ass and Let Me In, she officially became a talent worth following, meaning that even a misstep — last year’s stumbling Carrie remake — earned notices that declared how “unnervingly talented” (Cath Clarke, Time Out) or “fiercely talented” (The Guardian newspaper) she is, whatever the film she’s miscast in.

So it’s no surprise that she’s a very convincing cellist in If I Stay, or that she had never picked up the instrument before taking the role.

“It’s so intricate, so soulful,” she says of the cello. “You have to devote like 15 years of your life to it to be any good at all. It’s a very emotive, versatile instrument. It took me seven or eight months to get to the point where I could fake it. It was less difficult getting the technical side of it, the bowing and all, than getting the emotion right. You get this vibration, playing the cello, the physicality of it is kind of wild. Watch a cellist who is really into it playing it and they seem to express these big emotions.”

She knew, going in, that she’d have an edge in that regard.

“You have to have long hair to REALLY get across that effect!’

But when she wasn’t playing the cello, If I Stay had her running, barefoot, through the halls of a hospital set, a lost soul trying to decide whether life is still worth living. She figures her peers — her generation — will buy into that concept without hesitation.

“We’re pretty open-minded about spiritual stuff,” she thinks. “We’re smart enough that we don’t want to be spoon-fed a belief system, some sort of candy-coated philosophy. That’s why the movies that appeal to us are not just Christian or Buddhist or Jewish or whatever. We’re kind of open to looking at a broad spectrum of religions, beliefs and forms of spirituality. That’s why I think this movie will connect with people my age. We don’t want to be told what to believe, or to expect in an afterlife. If I Stay doesn’t tell you. It lets you think about it.”

Click here to enter to win a  FREE If I Stay prize pack!