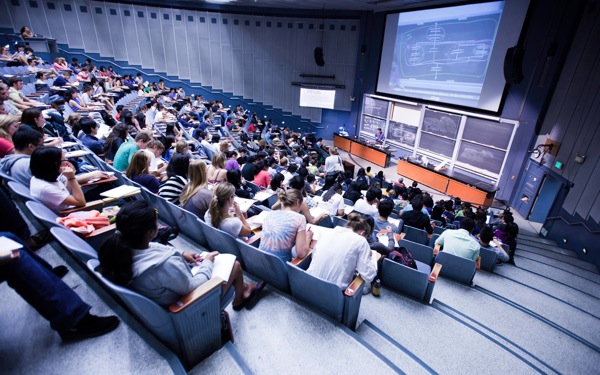 (MCT)  The University of California system is expected to enroll a record number of out-of-state students this fall — and will receive millions of dollars in return.

More than a fifth of all UC freshmen will come from such places as Texas, Washington, China and India and each will pay an additional $23,000 in tuition, providing the system with an estimated $400 million in extra revenue that officials say helps support the education of Californians.

The out-of-staters will include incoming UCLA freshman Bridget Bruggeman, who passed over her home state school, Indiana University, and other colleges that accepted her.

"Being from the Midwest, there is definitely an idea of California as a place where you can dream as big as you want to. That's something I was very drawn to," said the 18-year-old, who intends to major in international development studies and Spanish.

Her family decided UCLA was worth the extra cost, which will mean tuition about three times what it would have been for her at Indiana University.

"It definitely would have been less expensive to go to I.U., but I don't think I would have been as happy," said Bruggeman, who attended a recent orientation program at UCLA.

Decisions like that are more frequent as students from outside California and the United States for the first time will constitute more than 20% of freshmen, according to preliminary data for the fall.

Among the freshman classes at the nine UC undergraduate campuses, the highest percentages from out of state are at UCLA, 30.1%; UC Berkeley, 29.8%; and UC San Diego, 28.4%.

Following other states, the UC system began aggressively increasing the numbers of non-California undergraduates five years ago to offset reductions in state support and a freeze on in-state tuition.

Although critics contend it hurts Californians and reduces political support for the campuses, UC officials insist no California residents are being pushed out to make room for these students. The $23,000 non-Californians pay on top of the regular $12,192 tuition will provide about 6% of UC's core educational budget and help maintain classes and financial aid for Californians, administrators say.

Students from outside California have mixed reactions toward the extra tuition, influenced by family resources and educational quality in their home states. Many are grateful to attend a prestigious public institution such as UCLA or UC Berkeley and still pay less than at a private university. Others feel strained and regretful, facing large debt they might have avoided.

During a break at UCLA's freshman orientation, Eric Rosenbower of Greensboro, N.C., said the surcharge is reasonable because in-state residents have paid "their hard-earned money" in taxes to support UC.

A math and economics major, Rosenbower, 18, could have gone to the University of North Carolina at Chapel Hill at much lower cost. But he was attracted to the diversity of UCLA's student body and the wider opportunities that Los Angeles can offer. "I think it will pay off in the long run.... It's a good investment in my education," he said.

Plus, he said, "going across the country is going to make me grow a lot faster than if I stayed close to home."

UCLA economics major Farhan Mithani, who grew up outside Houston and passed up the University of Texas at Austin, feels differently.

He receives some financial aid at UCLA, but officials say eligible students such as him generally receive much less than in-staters and usually do not get help to pay the additional tuition.

Mithani, 21, estimates that he will owe $120,000 in student loans by his graduation next year. Now he said he wishes he had stayed in Texas and been debt-free even though he said UCLA "is a great school."

UC, he said, uses "out-of-state students as a kind of bank. And I think it's wrong because I have no control over where I grew up."

Utkarsh Pandey, 20, came to UCLA from Gurgaon, India, to study materials science and engineering. UCLA, he said "has given me educational, professional, and cultural experiences that I don't feel I could've gotten in India or any of UCLA's rival schools in the U.S."

As an international student, he does not qualify for UC financial aid, and his family is paying all costs. Charging non-Californians so much extra, he complained, is "hypocritical in today's day and age of egalitarianism."

According to recent statistics, 3,691 students from other states have said they will enroll as UC freshmen, up 389 from last year, and 5,412 international students have indicated that they will attend, 662 more than last year.

With their strong reputations, some flagship public universities such as UCLA do not have to worry about large surcharges scaring away applicants from other states, said Barmak Nassirian, director of federal relations and policy analysis at the American Assn. of State Colleges and Universities. "They can absolutely compete on brand strengths rather than price."

And more families these days appear to listen to their children's' "emotional layer" of wanting to attend a college far from home, Nassirian said.

(Across all 23 Cal State University campuses, about 4% of undergraduates last year were from other states and countries, with concentrations in San Diego, San Luis Obispo and Northridge. Cal State students from out of state pay about $11,100 in addition to the $5,472 base tuition.)

Until 1993, it was easy to establish California residency within a year or so and then pay the lower tuition. But UC rules were tightened so that current students must prove financial independence for at least two prior years, among other things, to gain resident status.

As a result, only "a very small portion" of students from outside California do so, said Stephen Handel, the UC system's associate vice president for undergraduate admissions

Nonresidents earned slightly higher grades in their first year but had a somewhat higher dropout rate, which officials say could be caused by homesickness and financial pressures.

Vandan Kasar of Bellevue, Wash., turned down the University of Washington and other colleges in favor of UCLA, where she is entering her third year. Kasar, 20, a human biology and society major, said her family feels a financial strain because she receives no financial aid. And she said she sometimes misses home when California classmates can more easily visit their families.

Still, she said, she has no regrets.

"I don't know if I am able to put a price tag on all the different experiences I've had here," she said. "Besides the academics, I'm gaining life skills that make it worthwhile in the long run."