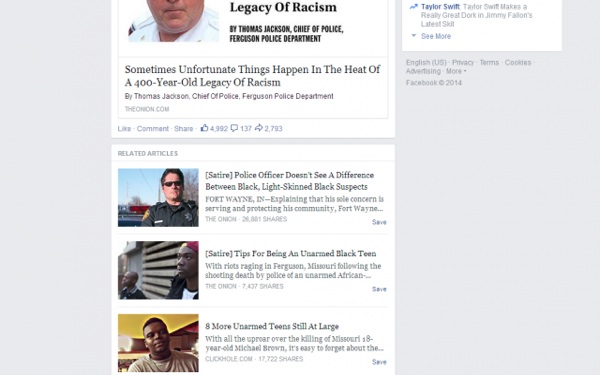 Facebook must realize how frustrating it is for certain people who see a bizarre headline on their news feeds (i.e. "Fireflies Almost Salvage Man's Shitty Done" from The Onion's page) and are unable to discern whether it's real, a satire or a joke. Because of this "confusion," the social media site is testing out a "satire" button.

Mashable reports a Facebook representative said, "We are running a small test which shows the text '[satire]' in front of links to satirical articles in the related articles unit in News Feed. This is because we received feedback that people wanted a clearer way to distinguish satirical articles from others in these units."

Satirical sites, like The Onion, are included in the program, which lets Facebook users know which articles are satire in news feeds by placing the word "Satire" in brackets next to the article after the user clicks on it.

"If a friend posts an Onion link to his or her Facebook feed, click on it for a laugh," explains Ars Technica. "Once you're done at The Onion and come back to your desktop or laptop browser, Facebook will have generated three related articles in a box directly below whatever you'd clicked on."

Although some will undoubtedly argue that this auto-tagging takes the fun out of the articles we see on sites like The Onion, it will definitely take away any confusion you may have after reading a satirical article, especially on sites that are not as well known as The Onion.

So roll your eyes and shake your head, but as the Huffington Post reports, there have been oh-so-many times when (sadly) people mistook satirical articles as actual news.