Counting Crows Throwback to the Classics Sunday Night at The Greek 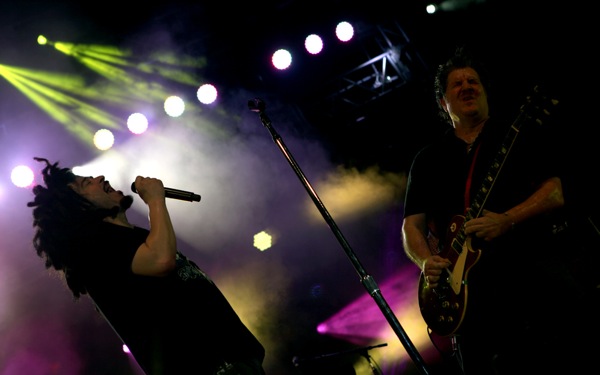 NOTE: Photo was not taken at The Greek.
(Credit: CountingCrows.com)

Since moving to Los Angeles I have long awaited my first show at The Greek. Its movie star-like mythical presence always beckoned to me whenever I’d stroll through Griffith Park. Now, the beast and I are finally friends, and I have the Counting Crows to thank for it.

For the last leg of their summer tour, the Counting Crows headlined the iconic L.A. stage with friends and family by their side and two amazing bands to open for them: Daniel and the Lion and Toad the Wet Sprocket. The night was a tribute to the past and present, as the set list featured old hits and material from their new album Somewhere Under Wonderland.

I didn't know what kind of vibe to expect, but the fun-loving atmosphere kept me at a peaceful ease. Casual L.A. glamor drifted through the crowd, but most fans took the laid back root, rocking a '90s hangout style. My friend and I were certainly the only two people there recognizably under 30, which led to us not so coincidentally being the only ones ID’d at the bar.

Front man Adam Duritz mesmerized the crowd with every syllable and stroke he hit, be it piano or guitar. The group jammed harmoniously back and forth, like only a group of almost 25 years could. The energy flowing among fellow group members David Immergluck, Millard Powers and Dan Vickrey was tremendous, bringing dazzling sounds dancing to our ears.

Somewhere Under Wonderland might not have the melodic feel of classics like "Mr. Jones" or "Mrs. Potters Lullaby," but the album definitely keeps a note. After closing their summer tour playing at The Greek, I guess there is only one thing left to say: till next year…(hopefully!)