Steve Ballmer Leaves Microsoft Board to Focus on Clippers, Teaching 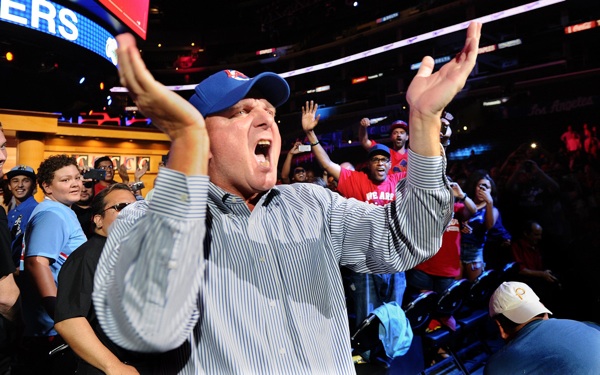 Clippers' owner Steve Balmer greets the fans as he is introduced at the Staples Center on Aug. 18.
(Credit: Wally Skalij/Los Angeles Times/MCT)

(MCT) New Clippers owner Steve Ballmer resigned from Microsoft's board of directors, saying Tuesday that the combination of "the Clippers, civic contribution, teaching and study" would leave him little time to keep abreast of the company he led for 14 years.

"Given my confidence and the multitude of new commitments I am taking on now, I think it would be impractical for me to continue to serve on the board, and it is best for me to move off," Ballmer said in a letter to Satya Nadella, Ballmer's successor as Microsoft's chief executive. "The fall will be hectic between teaching a new class and the start of the NBA season so my departure from the board is effective immediately."

Last week, the NBA officially cleared Ballmer's $2-billion purchase of the Clippers. Ballmer stepped down as Microsoft's CEO six months ago after a tumultuous reign in which he missed the potential of the iPhone but found a hit in the Xbox gaming console.

Ballmer, 58, said he hadn't really considered post-Microsoft life until his last day. At a welcome rally in Los Angeles Tuesday and in an interview with The Times, Ballmer signaled that he has plenty of ideas about the Clippers that should keep him busy. Among them is introducing technology at Staples Center to keep fans better engaged.

"I bleed Microsoft — have for 34 years and I always will," he said. "I continue to love discussing the company’s future. I love trying new products and sending feedback. I love reading about what is going on at the company. Count on me to keep ideas and inputs flowing."

Ballmer announced his intent to resign as CEO of Microsoft almost exactly a year ago, and since an initial dive, Microsoft shares have been trending upward. They were trading at about $45.11 late Tuesday.