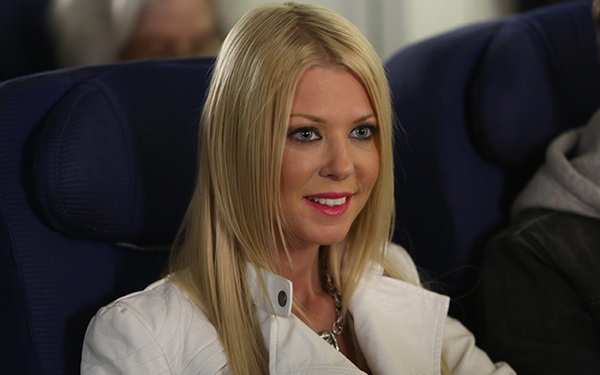 If you grew up in the ‘90s, you were probably introduced to Tara Reid through films such as American Pie (1999), The Big Lebowski (1998) or Cruel Intentions (1999). But for those of you who belong to this new generation that turns to social media for basically everything, you probably know of her from the Sharknado films.

The first Sharknado premiered in 2013 on the Syfy channel and attracted a ridiculous cult following; Sharknado 2 created an even bigger out-of-this-world phenomenon.

The sequel aired on July 31 and reeled in 3.9 million viewers, setting a record for Syfy. However, Sharknado 2 really made an impact in social media; it generated more than half a million tweets—more than 300,00 tweets than the original.

Now, the second installment is heading to the big screen on Thursday (Aug. 21) for one night only in theaters across the country.

A little after Sharknado 2 premiered on TV, we caught up with Reid to talk about the film’s upcoming theater release, social media and even college.

Campus Circle: Since filming the Sharknado movies, what do you now know about sharks that you didn't know before?
Tara Reid: I know sharks are scary, and I know I don’t want to get bitten by one (laughs).

Recently, there was a shark attack in Manhattan Beach where my brother lives. It’s so funny because his wife actually called me and said for some reason that day, my brother just didn’t want to get in the ocean. And he’s not afraid of sharks. His wife called me up and said, “Your brother doesn’t want to go in the ocean. He acts like he’s scared of sharks.” And she made a joke like, “Oh, you’re afraid of sharks because of Sharknado.” And then that day, that shark attack happened right next to where they were, where they live. It’s freaky.

The Sharknado films are an interesting blend of the comedy and sci-fi genres. Is this a genre mash-up that you want to keep exploring with future roles?
What I find interesting is...it’s not a comedy, it’s not really horror. I feel like Sharknado created its own crazy genre in some way. There’s not really a genre for it...And I think that’s why the movie works. There’s no explanation for what happened. It was just something that people enjoyed, people had fun with. People went with their friends, watched this movie together and laughed. At the end of the day, what’s the healthiest thing for you? It’s laughing; it’s the best feeling in the world.

What do you think audiences will experience when they watch Sharknado 2 in theaters that they didn't experience when they watched the film in their living rooms?
I think it’s going to be different. First of all, I think watching it in the living room was the best thing, because it’s not like you have to go to the theater to have fun. You go to see it in the comfort of your own house, with your friends and chill out, and you didn’t have to pay for a movie ticket. You sit there and have a Sharknado party, and you know you’re going to laugh and have a good time. That’s the beauty of Sharknado.

Everything about this movie has been a little bit backwards; you never see a movie go to TV and then go to theaters. It’s unheard of. But I think when people go to the theater, it’s going to be people that got the humor of Sharknado and want to come together and laugh and watch it together. There’s nothing better when you’re in a movie theater and everyone is screaming and clapping. I think it’s going to be a really good time for people. That’s what it’s about. There’s so much stuff going on in the world that’s bad. Every time I turn on the news, there’s something horrible. In Sharknado, there’s nothing horrible about it. It’s just fun…it’s created a tone in a peculiar way, and it’s working, obviously.

Yeah, the sequel had such a huge social media response.
Yeah, it was like in the millions. And, not only was Sharknado trending at No. 1, I’ve never trended in my life, and I was No. 2 for a couple of days […] It’s unbelievable to me what’s happened with this film. It’s just amazing.

Do you consider yourself really active on social media?
I wasn’t that into it. I’m older. How old are you?

What are some of your hobbies when you’re not acting or promoting Sharknado 2?
Everyone who knows me knows I love to travel. Traveling is my thing; I love to see the world, I love to see different countries.

But, right now, my main goal is: my parents live in Palm Springs, and they’re getting older. And my father is not in the best health. So really, when I’m not working, I’m going to them, because there’s only a certain amount of time I have left with them. Right now, that’s my priority.

Don’t get me wrong: I think everyone should go to college and do what they want. But sometimes when you’re younger, and you start young, and you know this is what [you] want to do, go for it. And if it’s not working, go right to college.

At the time, I got into a lot of colleges, and there’s this thing called deferring from a college. So, when I got into college, my parents said, “Look, you can do whatever you want, but you’ve got to go to college.” My dad’s a graduate from Notre Dame, my mom’s a teacher—I come from a very educated family.

They were like, “You need to go to college, and then go back to your acting career.”

I said, “Please, just let me defer from college for one year. If the college doesn’t say ‘yes,’ I promise I will go right to college.”

And, they let me do that; the colleges said “yes,” so I knew I had a year to try to make it as hard as I could in California. I moved out here, and (I’m knocking on wood right now) it worked out for me.

I’ll never forget a quote my father said to me…he said, “Tara, life without a dream is no life at all. You go out there and get your dream.” That was the best advice he ever gave me, because it worked.