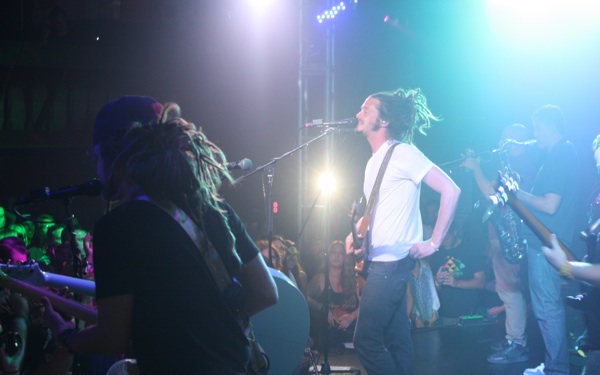 Every so often you get to see a band that can sell out arenas and jam out in a venue no bigger than a barnyard. Reggae/rock/Latin/dub band SOJA had no problem playing down a sold-out house party-esque Troubadour in West Hollywood Tuesday night during its Amid the Noise and Haste album release party. From the balcony down to the front row, all of the band's fans were radiating throughout the night.

The show was quite intense, as the hyped-up audience members kept packing themselves in deeper and deeper. There was barely room to stand, it was slightly uncomfortable, but the crowd didn’t seem to mind much. People broke out in dance moves on top of one another, creating an intermingled mass of moving bodies. One of my favorite things about seeing a band like SOJA is taking the chance to digest the wide variety of free spirited-dance moves. Some lovely gyrations were on sight.

With Sonna Rele and Murs opening the night, SOJA fans were beyond excited for the main gig. With the mood set, the eight-piece group was ready to lay down an epic performance.

On the last leg of its continental United States summer tour, SOJA filled the Troubadour with some of its finer tuned music and some new remedies from the recently dropped album. The fan reception was overwhelming as, from start to finish, the band and even the bouncers kept the energy ablaze.

Despite an end-of-the-night parking ticket, SOJA will be a great show I'll remember fondly. Whether it be the music, the venue, the crowd or the awkward 30-something women rubbing my back as I took pictures, something about last night was special.