In Their Own Words, Officers Describe Pepper Spray Incident 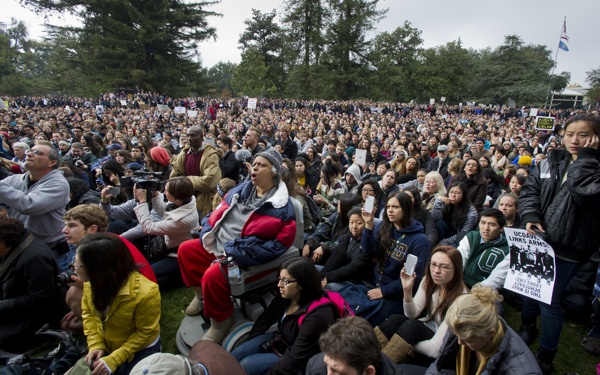 (MCT) In addition to the names of officers involved in the November 2011 pepper spray incident at UC Davis, The Sacramento Bee has obtained confidential interviews of the officers conducted as part of the internal affairs report that led to the dismissal of Lt. John Pike, the officer seen on video spraying the students. The interviews were conducted with the officers’ attorneys present and reveal for the first time the officers’ descriptions of the incident:

“It was one of the more, it was a frightening event when we were there. And I’ve, I’ve never been encircled like that, working other protest events. I’ve never seen the crowd flow as much as it did prior…”

“I have never felt enclosed like that before. Where I felt my personal safety was at risk…

“So it was, it was, based on that … it was an officer safety issue, definitely.”

“…(B)ascially, you’re putting yourself in the position, in this position where you’re surrounded by people who have been chanting as essentially comments that are suggestive of a lynching, and, you know, they could take his baton, they could push him on the ground, try to take his gun…”

“The crowd had grown precipitously from the time we first got there. I would estimate there were probably a couple hundred people there, you know, when they, when we were surrounded and they were chanting and yelling.

“The tone of the crowd that, that turned into, frankly, a, a lynch-mob type mentality. They, they were trying to secure the release of the arrestees by holding us hostage ... . There were two to three male subjects in the crowd that I directly observed pulling what appeared to be rocks out of their pockets and handing ‘em out to people.”

“I was thinking, ‘Man, we don’t have enough officers for this.’ At the point when we’re encircled, I’m thinking, ‘This is horrible, this is really bad…’

“Because we were trapped. There were still arrestees in that circle at that point, which was horrible. The crowd had grown at that point to, I’d say, between 200 and 300 people.”

“Then after the chants started getting louder, they had circled us and had blocked our walkway … and the group gathered closer to us.”

“It was, I felt, that it was a safety concern to try and move (the arrested protestors), based on the numbers of us them versus us. And we were trying to, being on the skirmish line, protect the people that were being detained and move them safely without somebody trying to lynch them.”

“Some of them were yelling threats, so I felt very threatened because a month prior I had dealt with with Occupy protestors at UC Berkeley and they had become very violent against the peace officers. Three officers were, went to the hospital with serious injuries. And they had grabbed stuff off officers’ belts.”

“We were fully encircled. Like, I was in awe. I was a little nervous, I didn’t know what was next ...’cause at this time they started moving a little closer. I mean, not even arm’s length … But I was thinking, you know, ‘How we gonna get out of here?’”

“It kind of brought me back to Berkeley that I know that … there are not just regular protestors of students, there’s also outsiders, there’s other groups that purposely instigate and they’re the ones with black bandanas on their face.

“And I remember that when we used flashlights at one point at the Berkeley protest you can see people holding slingshots … raised to take a shot.

“And after I got shot in the face, in the face mask, the officer next to me several minutes later got … a traffic delineator thrown right at her facial area and … gave her a concussion.”

“I’m a, generally, a nice person, and if I’m picking out my potential targets … if a brawl happens that means something is not right …, I’m not feeling safe.

“I was worried. I was worried the entire time that the students were going to do something to force me to do the other side of my job that I didn’t want to do. We weren’t there to stop the protesting, or to stop them from protesting.

“We weren’t there to hurt students. We were there to take down tents. And they had already started forcing our hand. And I was worried that they were going to force me to do something that I wasn’t there to do in the first place … I was scared of, that the consequences would involve me or my partners getting hurt, and then the long-term consequences of being in situations like this now.”