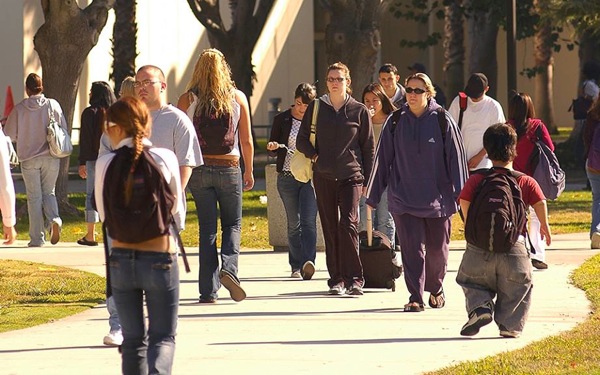 Her “urgent” challenge to teachers Thursday during a traditional welcome-back address: to stem a rising number of freshman dropouts and six-year students who don’t graduate.

“Students need to stay in school and graduate to succeed in today’s world,” Harrison, dressed in Matador black and red, told a nearly packed Valley Performing Arts Center. “Our goal should be to help our students persist and complete their degrees, obtain skills valued by employers and develop habits of social responsibility and civic participation.”

Harrison, in her third year as head of California State University, Northridge, has always been quick to trumpet school triumphs from the classroom to the athletic field of the 356-acre campus.

During the past year, she said the 56-year-old university marked some significant milestones, from its record 38,700 student enrollment last fall to its women’s basketball squad clinching the Big West Conference championship and going on to the NCAA Finals.

It also graduated 10,000 students this past spring, a record, received a projected $20 million in philanthropic gifts, another record, and was ranked a Top 10 “Value All Star” by Money Magazine and was listed among the top 25 film programs in the nation by The Hollywood Reporter.

While CSUN broke ground on a new dorm for 400 freshman students, she said it led California State University for the number of Facebook, LinkedIn and Twitter friends and followers. In addition, the campus has made great strides in lowering energy and water use.

But this year, the CSUN president marked her third convocation address with less emphasis on her “CSUN Shines” mantra and more on university improvement. Among her seven priorities: student success; focus on employees for success; CSUN visibility; plan for less state funding; increased research; environmental sustainability; and athletics as a tool for community engagement.

“It was a roll-up-your sleeves speech, to elevate CSUN and to address some of the challenges we face,” said Talar Alexanian, 21, of La Crescenta, a senior majoring in journalism and public relations.

Among those challenges is a record enrollment of close to 40,000 students, including 5,500 first-time freshman, 5,800 transfer students and nearly 1,500 graduate students — or up to 11 percent above enrollment targets set by CSU.

To accommodate the crush, according to Provost Harry Hellenbrand, CSUN once again hired more tenured faculty and part-time instructors to teach a greater number of Saturday, hybrid online-classroom and other courses.

The leap in students conforms to a CSUN philosophy of giving greater access to a greater number of qualified students; it also comes with a price tag. While the campus can pocket thousands of dollars in fall tuition from students above its enrollment target, Hellenbrand said, it can’t collect the $6,000 per student from the state.

Worse, it may be facing a $3.5 million state penalty for packing in extra pupils.

As a result, for the first time in history, Cal State Northridge may soon cap student enrollment — dubbed “full campus impaction” — by paring back as many as 3,000 students over the next several years.

“Unfortunately, given the budget realities, in the coming months we will be taking a serious look at the need to also declare full impaction at CSUN,” Harrison said. “I personally find that possibility and prospect to be contrary to our mission of access.”

Added Hellenbrand, who credited Los Angeles schools for educating a record number of qualified applicants: “That’ll put pressure on the public schools and where they send students to college. If they’re college qualified, and have done everything they need to have done, we believe they should have a seat.”

The other challenge, once they get a seat, is keeping it.

The number of first-time freshman who continued on to their sophomore year at CSUN in 2012-13 (the latest figure available) was 78 percent — or 7 percent lower than the Cal State average. And over the past year, the number of CSUN students who graduated in six years fell from 48 percent to 45 percent.

In addition to bolstering graduation rates, Harrison exhorted professors to burnish their curricula, reach out to at-risk students, become better trained in helping victims of sexual violence, and more. A moment of silence was held for Armando Villa, the CSUN fraternity pledge who died on a hike last month during what family members said was a hazing.

By next year, Harrison hoped to make CSUN a smoke-free campus.

“I think she’s trying to stay ahead of the time, ahead of the curve,” said Merril Simon, a professor of educational psychology and counseling, who praised her down-to-earth realism.

“That we’re not just following others, but innovating — leading.”

Campus News
What’s the risk of COVID-19 for a healthy young person?
738 views