Listen Up, Ladies: These Are Guys' Biggest Texting Turnoffs 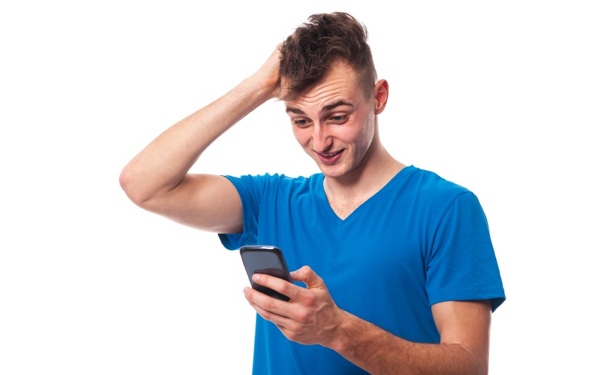 Communication is a key aspect of most healthy relationships and friendships, and texting is a convenient form of communication. Unfortunately, the way we text can be deal breakers for most people when deciding whether or not to date someone.

The developers of the app Omlet, a chat app that enables users to share text, images, files, video and music with anyone from any device (IOS or Android), conducted the survey “Digital Flirting Rules” to find the top five biggest chat or texting turnoffs for gals and guys by surveying 1,000 people between the ages 13 to 25.

Here were the results:

So instead of attempting to impress your crush with “cr8tive w4yz 2 ask dem out,” use your creativity on Omlet’s GIF-making widget to amaze your crush.

This isn’t that surprising because we’ve all, at some point, said, “I can’t date anyone who’s basically illiterate over text.” There’s nothing more frustrating than getting a text that reads, “Theirs a party tonight! Wanna come?”

Guys Aren’t That Excited About Exclamation Points!!!!!!!!
Apparently, 51 percent of guys are annoyed by too many exclamation points. Luckily, Omlet allows you to like a message more than once, so girls can show their excitement without being annoying.

OMG, Guys: Excessive Slang Doesn’t Make Girls LOL
Men, the No. 3 turnoff for a woman is when she sees too many BRBs, LOLs, WTFs, etc. in a text message. Keep the slang to a minimum.

don’t be afraid to capitalize your letters
For some odd reason, using lowercase words are the No. 4 turnoff for both guys (34 percent disapproval rate) and girls (53 percent).

Message Girls When They’re Awake, Not Sleeping
While survey results also showed that 43 percent of guys really like being messaged during non-waking hours (from 11 p.m. to 7 a.m.), less than 3 percent of girls want to receive an off-hour text, and 53 percent of them really dislike it.

Guys, instead of waking up your crush at 2 a.m. with an “Are you up?” text because you can’t sleep, use Omlet to edit a photo with stickers and text to surprise her with when she’s awake. Besides, a late-hour text kind of sounds like a “booty-call” text.

Aww! Guys Like Emoticons & Emojis Too :)
Surprisingly, more guys than girls like it when you use one of the smiley faces and emoticons!

Forty-three percent of guys and 36 percent of girls prefer to receive chat and text messages with multiple emoticons and emojis. Since guys love emojis and emoticons so much, girls can create stickers on Omlet to send to guys.