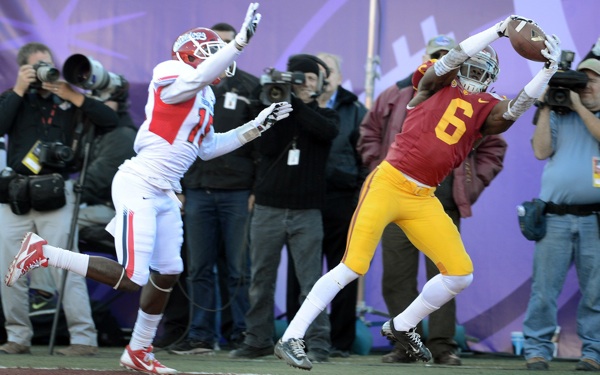 USC's Josh Shaw (6) comes up with an interception in the end zone.
(Credit: Craig Kohlruss/Fresno Bee/MCT)

He also is now a hero.

Shaw, a fifth-year senior, will be sidelined indefinitely because of ankle injuries suffered while rescuing a relative in distress in a swimming pool.

Shaw suffered two high-ankle sprains Saturday night after he leaped from a second-story balcony to come to the aid of a 7-year-old nephew who cannot swim, USC said Monday. Shaw, who was attending a family function at an apartment in Palmdale, landed on concrete and then crawled into the pool to assist his nephew, the school said.

“I would do it again for whatever kid it was, it did not have to be my nephew,” Shaw told USC’s website. “My ankles really hurt, but I am lucky to be surrounded by the best trainers and doctors in the world. I am taking my rehab one day at a time, and I hope to be back on the field as soon as possible.”

Shaw’s father, James, said he was not at the function but was not surprised by his son’s actions.

“That’s Josh for you,” James said in a telephone interview. “That’s about all you need to know about him.”

James said he “wouldn’t be surprised” if his son attempts to play Saturday or “gives it a shot,” to convince coaches he is ready.

Junior Kevon Seymour is the other starting cornerback, with freshman Adoree’ Jackson his backup.

“That was a heroic act by Josh, putting his personal safety aside,” coach Steve Sarkisian told the school’s website. “But that’s the kind of person he is. It is unfortunate that he’ll be sidelined for a while and we will miss his leadership and play, but I know he’ll be working hard to get back on the field as soon as possible.”