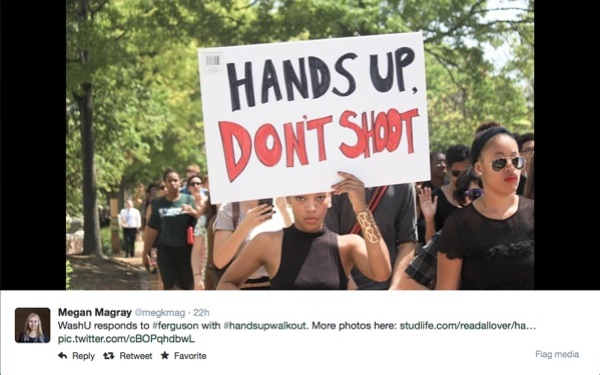 Monday, Aug. 25 was the day of Mike Brown's funeral. It was also the day the 18-year-old African American, who was shot and killed by a Ferguson, Mo. police officer, was supposed to begin his first year at college. And across the country, college students staged walkouts on their campuses that day to honor Brown and protest against police brutality and racial profiling (via MTV).

On Twitter, people used the hashtag #HandsUpWalkout to promote the event and draw attention to the organization's mission. The phrase "Hands Up, Don't Shoot" or "Hands Up!" was used because many believe (and witnesses say) that Brown was gunned down even though his hands were up and he was unarmed. However, it is still unclear if Brown did indeed have his hands up or not.

Darren Wilson, a white man, has been identified as the officer who shot and killed Brown on Aug. 9. Currently, the Missouri grand jury is mulling over the shooting, deciding whether or not to charge Wilson for Brown's death.

College students have expressed their outrage over the incident by peacefully protesting. For example, at Howard University, hundreds of students posed with their hands up to combat police brutality. The photo went viral, getting nearly 15,000 retweets on Twitter.