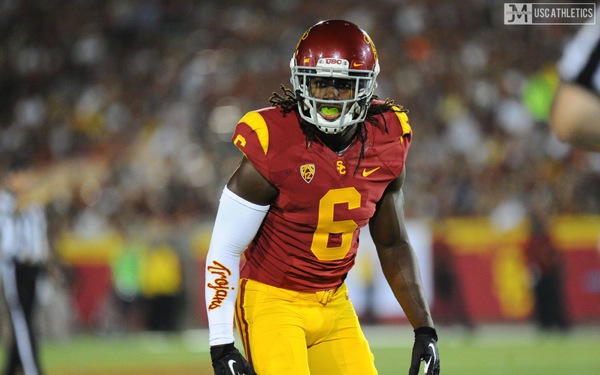 Reportedly, a man was seen "shimmying" down the side of a building in downtown L.A. When the police questioned a woman who lives in the building and gave her a description of the suspect, she said the man sounded like her boyfriend...Josh Shaw.

Police say Shaw denied being at the building.

The story is still developing.

Earlier on Tuesday, multiple reports about USC player Josh Shaw injuring his ankle after saving his drowning nephew went viral. However, ESPN reports USC is now investigating whether that story is true or not.

"Within the last few hours or so, we've gotten a few phone calls contradicting what Josh said occurred Saturday night, so we're going to continue to vet," said the coach. "We're looking at it. Beyond that, I only know what I know. Josh is adamant with what occurred, and we'll continue to vet some of the other stories that have come across our desk and our phones and see where we can go from there."

The heroic tale is as follows: Shaw jumped from a second-story balcony into a swimming pool Saturday night in Palmdale to save his 7-year-old nephew who cannot swim.

“I would do it again for whatever kid it was, it did not have to be my nephew,” Shaw reportedly told USC's website.

Sarkisian also told the USC website,"That was a heroic act by Josh, putting his personal safety aside. But that's the kind of person he is."

Shaw suffered two high-ankle sprains and will be sidelined indefinitely.

According to ESPN, the LAPD is expected to release a statement regarding the incident later Tuesday.