Amid Flattering Attention, the Bruins Just Want to Play 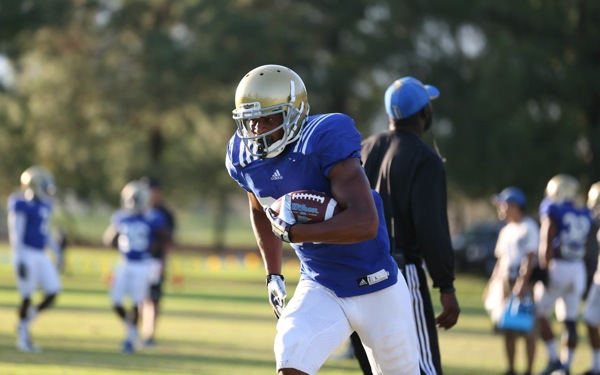 (MCT) LOS ANGELES—UCLA has certainly become the flavor of the month.

A few pundits observing the Bruins from a distance have predicted they will win the national championship. Others have already handed the Heisman Trophy to quarterback Brett Hundley.

UCLA players have gone from flattered to being a bit weary. They are ready to head east and face Virginia in the opener Saturday.

“Let’s play and then we can put all the speculation to rest,” cornerback Ishmael Adams said. “We can all just go out there and perform. Brett can put up the numbers he wants to put up. We all have our goals. So let’s play, put it to rest, so we can shoot for our goals.”

UCLA is ranked seventh in the Associated Press poll. It’s the highest preseason ranking for the Bruins since 1998, when they opened the season No. 6.

The attention swirled through the summer and has reached a point at which the Bruins have become the trendy pick even though Oregon — ranked third in the AP poll — is also in the Pac-12.

“It’s a lot different from two years ago, we’ve started to see the change,” Hundley said. “We all said we wanted the change, and it has come. You have to understand what you’re asking for. We’ve received the praise and everybody is hyping us up. It was nice. Now it’s like, ‘Let’s just play.’ “

Of course, there is always Coach Jim Mora’s way of dealing with the attention.

Asked about the national title talk and whether it was on his radar, Mora said, “Nope.” He then added another “nope” for effect.

Receiver Devin Lucien, though, sees the national title talk as a prophecy he wants to fulfill.

Asked whether he was ready for the season to start and the chatter to subside, Lucien said, “You don’t even have to ask me. I’m ready. I’ve been ready. This is supposed to be the year. Everyone is talking about us so, all right, let’s get to it. I want to prove everybody right.”

Center Jake Brendel continues to wear a brace on his left knee and limp into practice.

Asked whether Brendel would be available, Mora said, “We’ll see.”

Brendel is the linchpin on the line. He has started 27 consecutive games but suffered a sprained knee two weeks ago during training camp. If Brendel is unable to go, sophomore Alex Redmond could move to center. Redmond started 13 games last season at guard and has spent considerable time at center since Brendel was injured.

“Last year at this time, we were going to redshirt him, but he played well against Oregon so we continued with him there,” Mora said. “He’s stronger and more physical now. He’s always been an intelligent player.”

Among the freshmen who appear to be headed to a redshirt season are linebacker Dwight Williams, quarterback Aaron Sharp, receivers Jordan Lasley and Alex Van Dyke and offensive tackle Kolton Miller. All are on the scout team this week. Also on the scout team were running back Craig Lee, offensive lineman Colby Cyburt and offensive lineman John Lopez. Cyburt is a redshirt sophomore. Lee and Lopez are redshirt freshmen. ... Offensive lineman Carl Hulick has been moved to defense, where he will work at nose tackle. ... UCLA is expected to begin initial work on its football facility early in 2015. The athletic department has raised nearly all of the estimated $50 million needed for the project. The first phase will be to create space by shifting a trash compactor building next to Spaulding Field. Construction on the football building could begin summer of 2015.