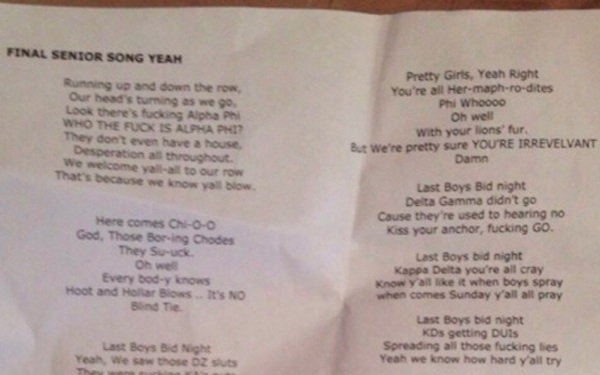 Well, well, well. Looks like we have another Rebecca Martinson-esque situation on our hands. Except this time, it involves seniors in Louisiana State University's Tri Delta sorority.

Gawker reports a leaked parody song that trashes other sororities at LSU has made its way into the hands of Total Frat Move and LSU message board Tiger Droppings.

The parody is supposedly set to the tune of Katy Perry's "Last Friday Night," and it spews out some serious hate at the ladies in Pi Phi, Alpha Phi, Fee-fi-fo-fum, etc. Some of the most hateful (yet kinda hilarious) lines:

"Yeah, we saw those DZ sluts/They were sucking KA’s nuts."

Oh, and this one:

"Pi Phi smoked a ton of blunts/What a bunch of poser cunts."

You can read the full lyrics here; it's highly entertaining.

As Gawker pointed out, the lovely Martinson is now writing at BroBible. This is her two cents on the Tri-Delt parody: "While the mature part of me is like 'How rude,' the other 99% is like 'Wow this actually rhymes pretty well.' Are any of these girls pursuing careers in songwriting? Because I think I sense the next Weird Al somewhere in these lyrics."

Well, if there is anyone who should judge a piece of writing filled with expletives and bashing sorority girls, that person would be Martinson.