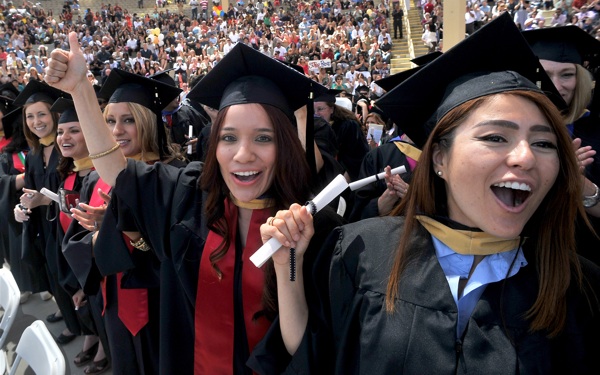 (MCT) Driven by shifts in technology and educational expectations across industries, California’s higher education leaders know they face an unexpected economic challenge just six years after the recession ravaged the state’s workforce: a potential shortage by 2025 of 1 million bachelor’s degrees.

Traditionally the domain of transfer and career technical education, community colleges are looking to offer bachelor’s degrees in vocational fields, a step that could be the biggest adjustment to the mission of the state’s three-segment system of public higher education since it was laid out more than 50 years ago in the California Master Plan for Higher Education.

“There’s no way the state universities can absorb the … demand or growth,” said Constance Carroll, chancellor of the San Diego Community College District, adding, “In California, the time is right” to follow 21 other states that already offer baccalaureates at the community college level.

Hans Johnson, a researcher at the Public Policy Institute of California who first calculated the often-cited million-degree figure in 2009, said a confluence of factors has driven educational expectations higher and higher, including a shift toward more technically advanced industries in California and a growing sense that college-educated employees are more effective.

Research suggests “there’s something about college itself that leads to these gains,” he said.

Johnson estimates that 40 percent of jobs will require a bachelor’s degree within a decade, up from about a third now. Yet, unless the public universities that educate most Californians improve outcomes or accept more students, the state won’t be able to meet that potential.

“We have the same eligibility as we did in 1960,” when the Master Plan was approved by the Legislature and only about 11 percent of people had bachelor’s degrees, Johnson said, “but our economy is completely different.”

Sacramento’s Sutter Health, for example, is moving toward a staffing plan for its hospitals in which 80 percent of nurses will require bachelor’s degrees, in line with recent changes to industry recommendations.

“The patients in the hospitals are much more acute and much more complex than they’ve ever been before,” said Anette Smith-Dohring, Sutter’s workforce development manager. “The better educated staff you have, the better opportunity you have” to provide good care.

The problem is finding enough potential hires, especially as much of the system’s aging staff prepares to retire. In California, more than half of new nurses graduate with a two-year associate degree.

“It’s not that they aren’t qualified, but there’s a lot they can’t learn in just four short semesters,” Smith-Dohring said, experience that must be made up on the job.

Carroll, one of the state’s major advocates for community college baccalaureates, said she started noticing the problem in the last few years as more than half of the nursing students in her district were not finding jobs. Unable to transfer to overenrolled California State University programs, those who wanted to continue their education had to enroll in more expensive private schools or look outside the state.

“Thirty years ago, someone could graduate from high school with a diploma, enter the workforce and be trained,” Carroll said. Now, “community colleges are the workforce preparation engines for the state.”

Facing those new realities, California soon could be offering bachelor’s degrees at its community colleges. A bill to create a pilot program, allowing up to 15 campuses over the next eight years to develop a baccalaureate that meets their regional need, currently sits on the governor’s desk.

Nursing is off the table for now; the pilot program will prevent duplication of degrees offered by the University of California and CSU systems. But it can address other fields where advocates say there is demand for more education and no public bachelor’s programs in the state: dental hygiene, automotive technology, respiratory therapy and radiative technology, among others.

If SB 850 is signed, campuses will present applications to the California Community Colleges Board of Governors, then the selected degree programs will have to be accredited, said Vince Stewart, the system’s vice chancellor of government relations, so it could be another year or two before any are established.

There has been no discussion so far of what programs the system might pursue, he said, but “there are some colleges that are in a position to move much more quickly than others.”

Foothill College in Los Altos Hills is eager to boost its associate degree in dental hygiene. The successful program has existed since 1964, but it’s become less competitive in recent years, according to Linda Thor, chancellor of the Foothill-De Anza Community College District.

“The employer is going to set the standard for what they want. And employers want bachelor’s degrees.”

The only dental hygiene baccalaureates in California are at private universities, Thor said: three in Southern California and the University of the Pacific in Stockton. Because of extensive prerequisites, however, Foothill would only need to add five courses to complete its own program.

Automation in the agricultural fields that are fundamental to their economies has exploded, with robotics and GPS technology being used in farming operations such as planting, application of herbicides and pesticides, harvesting and processing.

Houston suggested that his district, which has two colleges serving eight counties, could develop an “agricultural mechanics” degree for students to learn how to design, manufacture, implement and maintain those tools, competencies they’d otherwise be piecing together.

“It’s no longer a simple farmer with his or her hand tools,” he said. But “the very education that will advance the economies of our rural areas is not accessible to them.”

California veterans groups have aligned behind SB 850 as well, arguing that it would allow veterans, most of whom enter community colleges after the military, to complete their degrees where they start them and finish sooner.

While the chancellor’s office of the California Community Colleges is on board, not everyone is convinced that it’s the right change for the system.

“Community colleges are already struggling with the mission, and now we’re talking about extending the mission,” said George Boggs, former president of the American Association of Community Colleges, who was part of a baccalaureate study group last year.

“We’re doing it for the right reasons,” he added, but shifting resources to new programs could hurt the system’s many students who aren’t looking for applied degrees. Community colleges have mostly disappeared in states such as Florida and Utah, as almost all were transformed into four-year schools.

“A lot of it has to do with the status,” Boggs said. “I would hate to see our colleges reduce access to these students who otherwise don’t have a chance for higher education.”

Pushback has nevertheless been minimal, primarily concerns over funding and compensation raised by the Faculty Association of California Community Colleges.

While the bill’s supporters have identified a potential stream of additional revenue in charging higher fees for upper division courses, most of the financial details would have to be determined over the course of the pilot program.

“Once it starts and it grows very quickly, the drain of the resources will be quite large,” said Dean Murakami, president of the faculty association. “We just want to make sure it does not adversely affect our current programs.”