Surviving L.A.'s Made in America Festival: 4 Things You Need to Know 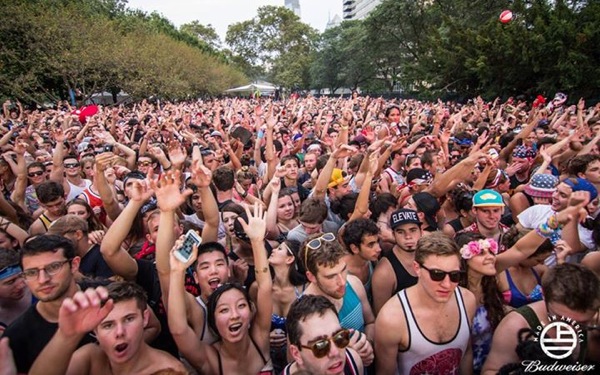 For the first time ever, Jay Z’s Budweiser Made in America festival is coming to Los Angeles. On Labor Day Weekend (Aug. 30-31) at Grand Park in downtown L.A., big musical acts, including Kanye West, Kendrick Lamar, Imagine Dragons, John Mayer and Iggy Azalea, will be putting on a non-stop show like never before.

If you’re a ticket holder, like me, you’re probably bursting at the seams, wishing the weekend would get here faster. But amidst all of the excitement, it’s important that you figure out a game plan on how to survive this two-day music fest.

Here’s your guide on how to survive L.A.’s Made in America festival:

WHAT TO WEAR
With warm temperatures expected to hit the mid-to-high 80s this weekend, prepare for it to be HOT. Guys and gals should dress accordingly.

Girls
I would stick to light and loose clothing items such as denim shorts, high-waisted shorts, light-colored jeans, rompers, tank tops, crop tops or sleeveless shirts. Personally, I think graphic tees or a graphic halter paired with denim shorts or jeans is a new, hip look.

Just remember one thing: this isn’t Coachella or HARD Summer, so you can leave the hippie garb (i.e. Native American headdresses, floral headbands) and barely-there neon clothing at home. The Made in America style is more laid back, hip, simple and urban. Maybe even a little “country.”

But of course, have fun with accessories such as sunglasses, jewelry and hats. Bring a purse or bag that can fit your camera, phone, lip gloss, wallet and cash. Just leave all of your designer items at home, because I’ve heard way too many stories about things getting stolen at music festivals.

And since the festival is called Made in AMERICA, there’s nothing wrong with showing your patriotic side. Bring out your red, white and blue, Fourth of July goodies and any clothing items that have the American flag plastered on them (just don't bring an American flag. Scroll down to "How to Behave").

As for your feet, please, please, PLEASE leave the heels at home! This is a large festival, so you’re going to be walking around a lot to get from stage to stage. Wear sneakers, flats (try to avoid open-toe shoes, though) or boots. If you insist on a heel, at least make sure it’s a very, very low heel.

Guys
The same goes for you, men. Stick with lightweight clothing such as shorts, tanks, graphic tees, light-colored jeans, jerseys and sneakers.

You can also bring out your patriotic side with red, white and blue American flag garb.

As for accessories, make sure you bring sunglasses and a hat. Bandannas also seem to be a huge trend at this fest.

THE PREGAME
Without a doubt, my friends and I are going to pregame a little before the festival. Yes, there will be alcohol, a few beers and some shots. However, it’s going to be a long day (the gates open at noon, music starts around 2 p.m., and the last act should be done around 11 p.m.), so we will be pacing ourselves.

Depending on where you’re coming from, you should start your pregame around 9 or 10. Drink a few beers, listen to some music and gather all of your friends so you can arrive at the festival together.

Ideally, if you have a friend who lives in DTLA, pregame at his or her place. That way, everyone can drink because you all can walk to the festival (or pay little money for an Uber) instead of driving under the influence. Which brings us to my next tip…

GETTING THERE
Realistically, getting to the festival is going to be a nightmare. Not only is downtown hosting the festival, but USC will be hosting its football game at the Coliseum on Saturday. Believe me, there will be a whole lot of people parking and hanging out in downtown that day.

As I stated previously, if you live in DTLA, take the easy route and just walk to the festival.

If you’re coming from out of town, I recommend taking mass transit. There’s a Metro station at Pershing Square and Union Station. However, the Civic Center/Grand Park Metro station will not be open on Saturday or Sunday (I know, that totally sucks). Click here for more information on getting to festival via the Metro.

Overall, avoid driving if you can. Uber it, take a Lyft, catch a taxi—whatever. Parking is going to be a b*tch.

HOW TO BEHAVE
There’s going to be at least 250 LAPD officers around the festival's perimeter along with MIA staff who will not tolerate any bullsh*t from fans. So please, don’t get publicly intoxicated or high as a kite, unless you want authorities to kill your vibe.

Also, make sure you don’t bring any of the prohibited items into the festival, including drugs, alcohol, glass containers, coolers, flags, backpacks, bottles or cans. It’s a long list, so make sure you read it all the way through.

--
So there you have it, festivalgoers! Have fun at this historic, musical event happening right here in L.A. Be safe, make memories and enjoy your three-day weekend.