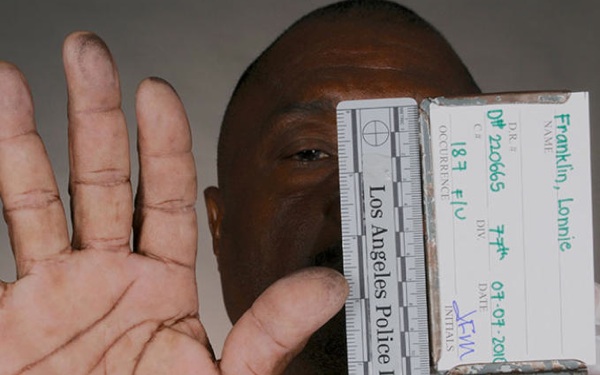 Tales of the Grim Sleeper

(MCT) For nearly a quarter-century, police said, Lonnie Franklin Jr. terrified people of South Los Angeles, luring women to his backyard camper with money and drugs and then brutally murdering them.

Franklin was arrested in 2010, and accusations that he committed sordid activities splashed across media in Southern California. He was charged with killing 10 people, though law-enforcement officials suspect him in the deaths of dozens more. He has pleaded not guilty to the charges. But far from being a lone wolf, Franklin was enabled and concealed by a complex network of friends and institutions, according to a new movie by the acclaimed British documentarian Nick Broomfield. The director contends that friends and police officers knew about — and may have even approved of — Franklin’s actions, in part because of his affability and in part for darker reasons.

In Tales of the Grim Sleeper, the director builds a case that Franklin was a genial man whose activities were known but ignored — or maybe even liked — by police and neighborhood acquaintances. Using his trademark bold-but-bemused style of filmmaking, Broomfield spends time with the residents of South L.A. in a movie that soon becomes a portrait of a place as much as a profile of a slaying suspect.

As Sleeper prepares for a film festival rollout that will include stops at the Toronto International Film Festival in early September, the New York Film Festival a few weeks later and possibly other venues, it could prompt Angelenos to reexamine the case they thought they knew — and contemplate the neighborhood they might not think about much.

“What struck me about the case when I first heard about it was that this guy was running around for so many years without being found,” Broomfield said in a phone interview from London this week. “It seemed so amazing this could happen right in the middle of Los Angeles.” He added, “I went in to this movie with simple questions: How was it possible that so many people knew, and how come the authorities didn’t manage to do something sooner?”

The answer to those questions, it turns out, isn’t simple.

Broomfield, a Brit who lives part time in Ocean Park, spent more than a year on and around such arteries as Western Avenue and Figueroa Street in the southern part of Los Angeles. He even set up an office in the neighborhood. Initially he encountered resistance, but soon people were coming by for a cup of coffee or a game of backgammon and talking about Franklin.

As they opened up to him, Broomfield found that Franklin — who is in jail awaiting trial — was liked and reviled, and he was very much present in the community where he is accused of committing murder.

A onetime employee for the sanitation department, Franklin was one of the more well-off members of the neighborhood. Broomfield argues in the film that Franklin became a killer despite — and in some ways because of — his conviviality.

A tight-knit group of friends said in the film that they strongly suspected Franklin was up to no good in his mysterious camper, but thanks in part to Franklin’s charm, those friends were unwilling or uninterested in delving deeper.

“I was surprised at how popular he was,” Broomfield said. “He wasn’t this reclusive, nutcase psycho killer that you normally hear about. He was very, very social, an engaging character, the guy who cracked the joke and was the life of the party.” (One friend even said he helped Franklin clean up his camper. He said he told himself an unidentified dark substance in the vehicle was oil but said he later realized it was probably blood.)

Broomfield elicits a level of colorful and disturbing detail in his exploration, such as Franklin’s role in what the filmmaker calls a “photographic society” for lewd Polaroids of women.

There are, however, no clear explanations behind the alleged crimes. Friends posit theories that Franklin came to be a misogynist due to a difficult first wife and that he may have been motivated to kill the victims — some of whom were prostitutes — by a desire to “clean up the streets,” they said. (Though popular perception and the nickname it yielded? suggest he was dormant for years, Broomfield makes the case in the film that he was killing throughout the whole time.)

In the film, one friend says startlingly that, “In reality Lonnie’s a good guy,” but that there’s “something inside him that triggers him off.”

But in some ways the villain of Broomfield’s documentary is as much the institutions that allowed the killings to take place.

Activists such as Margaret Prescod of the Black Coalition Fighting Back Serial Murders and the attorney Nana Gyamfi ?persuasively lament a police investigation that they say was lazy at best and negligent at worst. Why, they ask, did the police not alert neighborhoods that a serial killer was on the loose?

“You’ve allowed black women to walk around when someone was hunting them,” Gyamfi says in the film of the police efforts. The case would have been a dramatically different case, she says, if victims were “blond girl[s] with blue eyes from UCLA.”

In one scene, Franklin’s son Christopher, who is close with his father, suggests that the police even knew about Franklin and tacitly approved of his activities because by killing a large number of prostitutes he was doing their dirty work.

Broomfield juxtaposes these allegations with a scene of those in charge of solving the case. He cuts to a press conference with Los Angeles Police Chief Charlie Beck and then-Mayor Antonio Villaraigosa in which the latter proclaims that he is “proud to announce this terror has finally come to an end” thanks to “two decades of exhaustive detective work.”

Beck and Villaraigosa turned down requests for an interview by Broomfield. Franklin, meanwhile, can be seen only in news footage; he and his lawyers wanted him to appear in the film, Broomfield said, but the LAPD shut down any effort.

Many of the details are not new to those who have followed the case. Prescod has been active as far back as the 1980s. A Los Angeles Times article from 1989 quotes her as telling the Police Commission: “We are outraged that you have made so deadly a calculation when so many lives were at risk.”

Still, the ground-level view that Broomfield offers forms a heartbreaking and at-times blood-boiling account of how little appears to have been done while so much damage was being wrought.

It is, in fact, the neighborhood that soon becomes the real subject of the film. Broomfield explores its rules, rituals and ills while being assisted by Pam, an outspoken woman who becomes both guide and gadfly.

Violent crime may have dropped precipitously around Los Angeles in recent years — by 12 percent in 2013 compared with the previous year — but the people in Broomfield’s film are as lacking in opportunities as ever.? Crime is high, education is poor and crack cocaine remains an epidemic.

The movie, which is seeking U.S. distribution, also has inescapable echoes of the violence in Ferguson, Mo., as fraught relations with the police only worsen a bleak situation. As Gyamfi says, describing what people in the neighborhood do when they feel victimized, “No one wants to be the person who gives their name to the police. They’ll take you away.”

Broomfield, the unorthodox documentarian behind Kurt & Courtney and Tupac & Biggie, sometimes draws criticism for a self-conscious style and eyebrow-raising digressions. Here he offers a more measured piece. Friends, acquaintances, victims and activists are all given their due. The film closes with a touching montage of victims.

While Franklin remains in jail, South L.A. remains in its own kind of limbo. “My brain didn’t believe” is a phrase Broomfield uses early in the movie. Viewers may feel the same way.