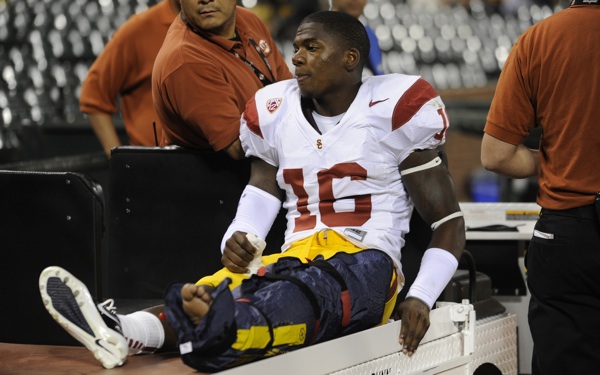 And the drama at USC continues...

"Sark treated me like a slave in his Office...Can't play for a racist MAN!!!!! #Fighton," he wrote on the social media app.

Later that afternoon, TMZ talked to Brown, and he reportedly said:

"I called a meeting up with this disrespectful guy!!! He called me a coward, all types of f**k words."

"He stereotype my mom and dad. like he belittle me to another level."

"I just responded Yes Sir and No Sir!"

"Never been treated like that before!! Don't Wish it upon anyone! That's who he is!"

According to ESPN, Brown quit the Trojan football team a week ago and has deleted his Instagram post.

Sarkisian was "shocked" when he learned about the accusation.

"As far as what [Brown] said on Twitter, I think it's ridiculous. Any of you guys that know me and if you ask anybody in our building, any of our players -- feel free to -- that's about the furthest thing from the truth. Quite honestly, I'm shocked," he told ESPN.

The USC Trojans have their season opener against Fresno State at the Los Angeles Coliseum on Saturday. For their sake, hopefully none of this week's drama will affect their game.