Pierce Brosnan is Still a Badass in The November Man 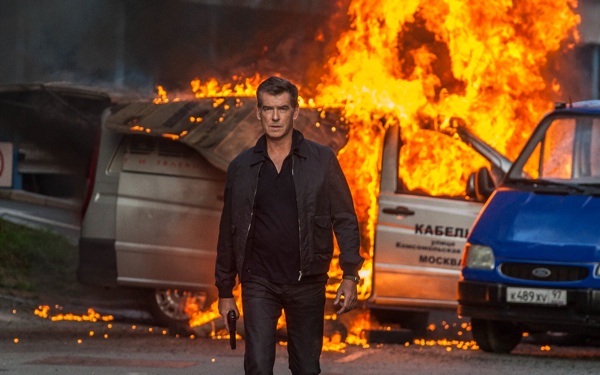 No, it’s not another James Bond movie; Brosnan is back playing Peter Devereaux in The November Man, based on There Are No Spies, the seventh entry of Bill Granger's The November Man book series.

Devereaux (Brosnan) is an extremely dangerous and highly trained ex-CIA agent, who is lured out of quiet retirement on a very personal mission. He must protect valuable witness Alice Fournier (Olga Kurylenko, also a former Bond girl in Quantum of Solace with Daniel Craig), who could expose the truth behind a decades-old conspiracy. However, he soon discovers this assignment makes him a target of his former friend and CIA protégé David Mason (Luke Bracey). With growing suspicions of a mole in the agency, there is no one Devereaux can trust, no rules and no holds barred.

The character “Devereaux is complicated. He’s a man who was in the field for many years,” explained Brosnan. “He’s learned and intelligent, and yet he’s also a trained killer, a professional dyed-in-the-wool agent, and he’s become very tortured and traumatized by that."

In his 30-plus-year career, The November Man comes at a good time for the seasoned actor who had some “unfinished business” after the Bond franchise ended.

“[The November Man] came out of a deep gut reaction with what had gone on with Bond and after Bond had left the stage in my life,” said Brosnan. “It was like unfinished business. The November Man came to us, and it made sense to develop this hard-nosed, cold-hearted yet cultured badass. The story had nuance. I like a movie with brains now and then, where you don’t have to demean the audience. There were 16 books, so it’d be nice if there were a franchise. It [a franchise] is the golden goose for any actor.”

When I mentioned that it’s great to see an action hero on the big screen who’s not in his 20s anymore, Brosnan said without a hint of vanity “Oh, I’m in my 60s now.”

“She was a beautiful woman to work the light fantastic with. She stole thunder in that film. I did what I did, but there was a certain alchemy with the two of us together. It comes from liking each other and trusting each other and being comfortable with each other. Then again, there are times when it just doesn’t work together between a guy and a girl. There are times when it doesn’t work, and you hate each other’s guts, and you just have to fake it.”

In all of his many films, including The November Man, it doesn’t seem like Brosnan ever had that problem. When I pointed that out to him, he said, “No, because [the actresses] are always so darn beautiful. I must’ve done something well in a past life. I signed up to be a leading man I guess.”

“And you get paid,” I offered.

“And get paid. And get away with it,” he agreed.

Brosnan might get away with it now, but like most actors, he didn’t start out living the good life. Before Brosnan was Bond, he was a working actor across the pond until he decided to make the jump to L.A., where he soon landed the role that would change his life: Remington in CBS’s “Remington Steele.”

“[If there was] no Remington Steele, then no Pierce Brosnan. And no Irish James Bond,” said Brosnan. “I came out here [to L.A.] 30 years ago with my late wife and had some aspirations to be working with Martin Scorsese and [Francis Ford] Coppola.”

He continued, “For my first interview, I drove over Laurel Canyon in my lime green Pacer, which blew up on me. I went to CBS, and they were looking for this character, Remington Steele, and I got the job. I got lucky. I came out for two weeks, and 30 years later I’m still here.”

“You got the job after two weeks?” I asked incredulously.

“I got the job the third day I was here,” he said. “I was staying with a friend of my agent on Hayvenhurst [in West Hollywood] in the back room. We got into town on a Monday, I think. We were jet lagged and went to Schwab’s [drug store], and the next day I had the interview, so I rented the car.

My very first interview was Remington Steele. They asked how long I was here for, and I said two weeks. They asked if I was prepared to come back, and I said of course. I went back to London, and they called me back a few weeks later. I came back to screen test and got the job. [CBS] bought nine episodes. We packed our bags and moved into a house on Sunset Plaza, and I’ve been working my ass off ever since.”

As every actor hopeful understands, making it big in Hollywood is no easy feat. My struggling actor friends would undoubtedly be jealous if they heard Brosnan’s fairytale story.

But, as he says, “Everyone has their story. It all comes from hard work and good luck.”

And perhaps it’s true. With some hard work and luck, maybe we can all be cultured badasses well into our 60s.

The November Man is in theaters now.