UCLA Wants Hundley to Run Only if Needed 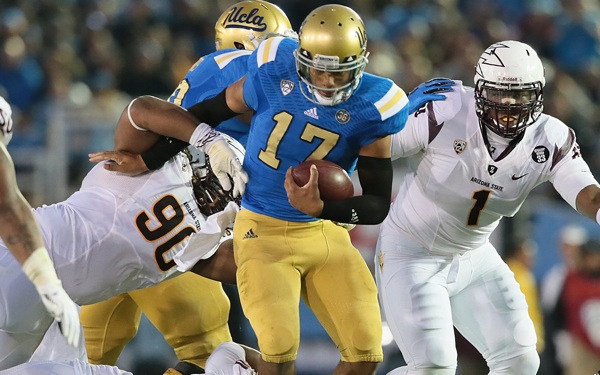 (MCT) LOS ANGELES — Ask UCLA coach Jim Mora whom he would like to see lead the Bruins in rushing this season and he rattles off a list of candidates.

The name that doesn’t surface is that of his quarterback, Brett Hundley.

Hundley was the Bruins’ leading rusher last season, partly by design and partly because of injuries.

Before Hundley, the last UCLA quarterback to lead the team in rushing was Larry Zeno in 1964. Hundley’s 748 yards were the third-most by a Bruins quarterback, behind Jeff Dankworth, who had 815 in 1976, and John Sciarra, who had 787 in 1975.

Yet, for the sake of the team, it is clear Hundley needs to expose himself less to opposing defenses. He is the one player the Bruins can’t lose.

“I would like him to run only if he has to and he makes me a first down,” offensive coordinator Noel Mazzone said. “Those guys are called running backs, the other guy is the quarterback. I’d like the running backs to run it and the quarterbacks to throw it.”

The trouble with that equation is Hundley’s running ability has made him special to the Bruins and dangerous to other teams.

Hundley’s first play for UCLA was a 72-yard touchdown run against Rice. Last season, injuries to James and Manfro slowed their seasons. Perkins was the team’s second-leading rusher, with 573 yards.

“We had some injuries, so I had to take matters into my own hands and run the ball,” Hundley said.

“It’s the threat of it,” Mazzone said. “You have to counter it and prepare for it. He proved it last year pretty well.”

But there is a risk.

Hundley sprained his right ankle against Nebraska in 2012, an injury that bothered him throughout the season, when he made a poor slide on the ground. Hundley has worked on his sliding technique this week in practice.

A new candidate in the Bruins’ running-game-by-committee plan is Nate Starks, a 6-foot, 190-pound freshman.

Starks had a slow start in training camp because of a bout with flu, but he has come on in the last week.

“All of a sudden it was like, ‘Who are you? Where have you been?’ ” Mora said. “He looks explosive. He looks more confident.”

Starks will make the trip to Virginia for Saturday’s season opener, but Mora’s preference is to use the James-Manfro-Perkins trio, with a dash of Jack. Starks will play if there is a need big enough to burn a season of eligibility. Otherwise, he might redshirt.

Mora said the running back rotation would be determined “as the game goes on. Who is having a good day? Who is struggling? What type of defense are we facing?”

Asked about the Bruins during a news conference this week, London said, “They have a lot of expectations. They are in a lot of top-10 polls. Some have picked them to win it all. (But) they’ve got to cross three time zones to play us here.”

Later, when again asked about the Bruins, London said, “They are an exceptional team that has to cross three time zones to play us in Charlottesville.”

Kickoff is noon Saturday, 9 a.m. on the West Coast. By 9 a.m. on practice days this week, the Bruins were already 15 minutes into drills.

Mora said the Bruins will leave Thursday after practice and practice in Charlottesville on Friday.

“It’s a little different, because our guys are traveling on Thursday, but it’s nothing they can’t handle,” Mora said. “We try to put them in uncomfortable situations all the time.”

“That was a little uncomfortable for them,” Mora said.