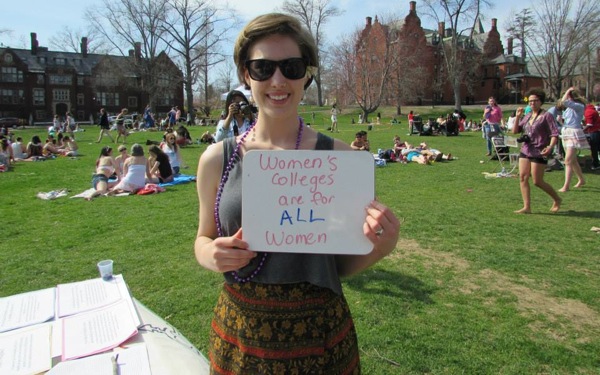 At the women's college Mount Holyoke College in South Hadley, Mass., Open Gates (a Mount Holyoke student organization) is advocating for the inclusion of transgender women into the school, reports Buzzfeed.

“It’s significant that so many women are flat out excluded from ever attending Mount Holyoke College, and this past semester, students became more aware of this fact," Open Gates board members told the website.

Last May, students went around campus and took pictures of students, alumni and community members who believe transgender women have a place at the school.

However, Mount Holyoke isn't the only college that has faced scrutiny over not admitting transgender women.

In 2013, women's liberal art college Smiths College rejected transgender woman Calliope Wong because her financial aid document registered her as a male. Although Smith students protested the college's inability to establish an admissions policy that included transgendered women, the college did not alter its policy. Wong enrolled in the University of Connecticut instead.

Progress was made at Mills College in California, however. Earlier this week, media outlets reported the college changed its admissions policy to allow transgender students to enroll. It was the first time in 162 years that a all-women's U.S. college considered an application from any individual who self-identifies as a woman.

Brian O'Rourke, vice president of enrollment and admissions at Mills, told SF Gate, "The purpose of the policy is that we didn't want students to feel excluded in the application process."

“Now that Mills College has set a precedent with their newly clarified policy," Open Gates told Buzzfeed, "there’s a real possibility out there, a true example of how changes can be made to include trans women, at least by law, at women’s colleges.”