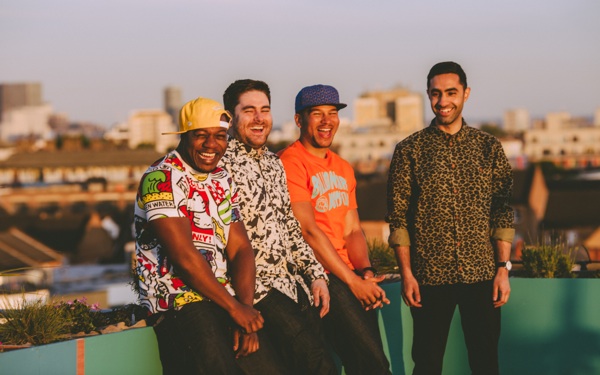 Rudimental is a genre-hopping electronic band that has been on the rise ever since its single “Feel the Love” and debut album Home topped the charts in the U.K. So far this year, the band has been keeping busy by touring around the world, playing its own shows and performing at big music festivals, like Coachella, Lollapalooza and Glastonbury.

Despite such a packed schedule, however, the band has also been working on new music and is expected to release its sophomore album by the end of this year or next.

On a Tuesday morning, I caught up with band member Piers Aggett and talked about the music, Rudimental’s new record label and even college (or, as the British call it, “university”).

Before meeting fellow band member Amir Amor and forming Rudimental, Aggett and Kesi Dryden began collaborating with each other early on in their music careers. Both raised in Hackney, England (like the rest of the band), they have been sharing their music ever since they were in high school. Although Aggett said they didn’t work as closely as they do now, the two began spending a lot of time in the studio while they were studying at Leeds Metropolitan University. They also began to work with DJ Locksmith at the time, by sending him their songs to be played on pirate radio.

But, it wasn’t until they and band member Leon Rolle met Amor that they decided to form Rudimental. “When we met Amir, it kind of felt like we put the piece to the puzzle, and the music has stepped up,” said Aggett.

Winner of the 2013 “Best Album” MOBO award and 2013 nominees for a Mercury Prize, there’s no doubt that the quartet has reached a point of stardom and success. However, the path to recognition didn’t come so easily.

“Rudimental didn’t really kick off for about four to five years after university,” Aggett shared, “Even then, [we had] to work hard, and once things happened, [we worked] harder.”

Spending most of this year on the road performing, the band somehow found time to work on its second album (which apparently is almost finished). Aggett revealed that even when they have a few days off and return back home to London, the guys somehow still end up at the studio by the end of the first day.

“You get bored, and I don’t know, we love making music,” he said.

Aggett described their new album as a progression of the first one. It still has a lot of the drum ‘n’ bass, jungle, house and jazz influences that can be heard on Home, but it is a lot more soulful and funkier. Fans should expect more collaborations with well-known artists, like George Clinton and Nas, but the album also features a lot of unsigned talent that they plan on launching on their new record label.

“We haven’t gone to work with all of the pop stars,” Aggett chuckled, “which was never our plan.”

Naming the label Major Toms, Rudimental is hoping to create a place that is similar to Motown Records. “The label’s kind of an extension of the Rudimental culture and the Rudimental vibe, which is soulful music and good music,” said Aggett. “We want to launch artists that we find, like the future John Newman’s and Ella Eyre’s.”

When asked about touring outside of the U.K. and away from home, Aggett said there isn’t much of a difference between playing before a British crowd and an American one.

“Our show is exciting and such a party that people and the fans just love to party and scream and shout and throw their hands in the air and sing along,” he explained. “It’s great to be in a place where we can attract fans wherever we go.”

And the band does seem like they have a lot of fans from all over. Thursday night at Sound Nightclub, Rudimental attracted what seemed like a very worldly crowd in the heart of Hollywood. Many visiting Europeans and transplants made it out to check out the band for its DJ set, and like Aggett said, they were ready to party.

Although Rudimental didn’t play live, the friendly United Nations-esque crowd seemed thrilled to watch the guys spin. A very excited visiting Italian noted how much he loved the quartet, as fans danced around to its music. With a live, funky trumpet added to the electronic beats, the DJ set was a refreshing breath of air, which is exactly what the U.S. music scene needs.

If you want to get a taste of what’s to come on Rudimental’s second album, check out their single “Powerless,” featuring Becky Hill.