By Gary Klein and Lindsey Thiry 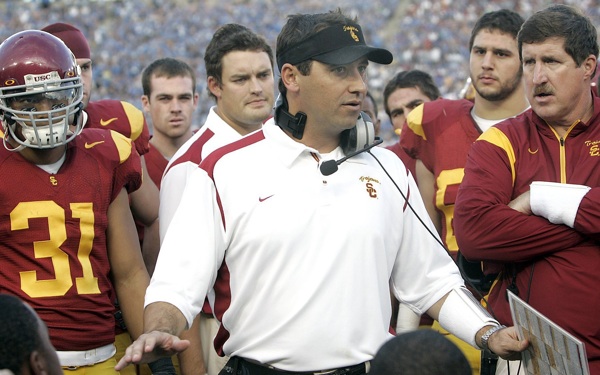 (MCT) LOS ANGELES—This was supposed to be a back-to-the-business-of-football season for USC.

NCAA penalties were in the past. Unpredictable Lane Kiffin was out as coach.

Steve Sarkisian was ready to make his debut at the controls of a new-look, nationally ranked team.

Yet, as USC prepares for Saturday’s opener against Fresno State at the Coliseum, the talk has been about anything but football.

The hot topic has been the off-field shenanigans of a senior cornerback who won’t be playing, a furor interrupted briefly Thursday by a ruckus prompted by a player who is no longer on the team.

After practice, Sarkisian was again bombarded with questions about Josh Shaw’s fabricated story of injury. And less than an hour after he was finished navigating that, he was compelled to seek out reporters working in the sports information office inside Heritage Hall to address racism claims made by running back Anthony Brown, who quit the team.

A day earlier, Sarkisian had been asked if he sought the advice of other coaches about handling distractions.

“I’m not a newbie,” said Sarkisian, who coached five seasons at Washington. “I’ve been around it enough. I think I have a good grasp of how to keep my team focused and attentive to the details and prepared to play.”

His confidence will be tested Saturday.

Shaw, a team captain, has been suspended indefinitely after admitting to school officials that he lied about the cause of his recent ankle injuries. He had claimed the injuries occurred when he leaped from a balcony and saved a nephew from drowning in a swimming pool at a family gathering in Palmdale last Saturday night.

Shaw’s attorney said this week the player was hurt when he fell off a balcony at a downtown apartment complex.

The Los Angeles Police Department said it responded about 10:40 p.m. Saturday to a report of a “screaming woman” inside an apartment at the Orsini Apartments on North Figueroa Street. Officers knocked on the door of the third-floor unit where the screams were heard but there was no answer, Officer Sara Faden said. The officers then broke open the door and conducted a brief search of the apartment, finding no one inside. Officers noticed “the window had been pried open,” she said.

Faden said witnesses told police they had seen a black man with dreadlocks climbing from the third-floor balcony of the apartment. The woman who resides in that unit then arrived on the scene. Given the description of the man provided by witnesses, she said it fit that of her boyfriend, Shaw.

The woman, whom police have not identified, reported nothing stolen from the apartment. The LAPD has not accused Shaw of wrongdoing but has said it is still investigating and would seek to interview him.

Shaw has not spoken to reporters. Sarkisian said that when Shaw admitted his lie to USC officials, the player did not explain what actually did happen.

“We weren’t privy to ask,” Sarkisian added, noting that Shaw had been accompanied by his attorney.

About the time the tumult over Shaw was starting to wane, a post on running back Brown’s Instagram account started making the rounds on social media.

Sarkisian announced Brown had quit the team but said the player’s claim was “ridiculous.” “That’s about the furthest thing from the truth,” Sarkisian added.

Brown confirmed that the post was made on his account, but he did not respond to text messages asking whether he wrote the post accusing the coach of being a racist. The post was removed Thursday afternoon.

Sarkisian said he had encouraged Brown to continue to play. “We thought he could be an asset to our team, especially if he’s healthy,” he said.

“Coach Sark is a great person/coach! Please disregard comments that have been made by someone,” defensive tackle Antwaun Woods wrote in a tweet. Later he said he “Never, ever in a lifetime” had heard racist remarks by Sarkisian.

USC’s older players have plenty of experience dealing with distractions.

In 2012, the Trojans were ranked No. 1 in preseason polls but stumbled to a 7-6 record while navigating a series of controversial moves by Kiffin.

First, Kiffin’s comments about voting in the USA Today coaches poll ignited a controversy, then he banned a beat reporter from practice for revealing that a player had undergone surgery. Kiffin and his staff also came under scrutiny after then-freshman quarterback Cody Kessler was ordered to switch jerseys during a game against Colorado. And USC was fined $25,000 after it was discovered that a USC student manager had intentionally deflated footballs against Oregon.

The season ended with an embarrassing loss in the Sun Bowl and players arguing in the locker room.

Last season, Kiffin was fired after five games — in the middle of the night at Los Angeles International Airport after the Trojans returned home after being crushed by Arizona State in Tempe.

USC rallied under interim Coach Ed Orgeron, but he then bolted the program before the Trojans’ bowl game after the school hired Sarkisian. Offensive coordinator Clay Helton coached the Trojans to victory over Fresno State in the Las Vegas Bowl as USC finished with a respectable 10-4 record.

“We’ve had to deal with so much more adversity in past years, even before this,” junior defensive lineman Leonard Williams said Wednesday, about six hours before USC announced that Shaw was suspended. “Our team has become adjusted to playing through adversity.”

Senior linebacker Hayes Pullard said the veterans will help the younger players as the Trojans prepare for the season opener.

“This is exactly when the leadership role comes in,” he said, adding, “Just being able to talk to them and meet with the young guys and tell them this is something little.

“You don’t worry about it and you just focus.”

As for Shaw, Sarkisian said Thursday that he could “potentially” be reinstated to the team this season. “Obviously, there are some things that have to take place,” the coach said, adding, “When the time’s right, if the time’s right to bring him back, we will.”