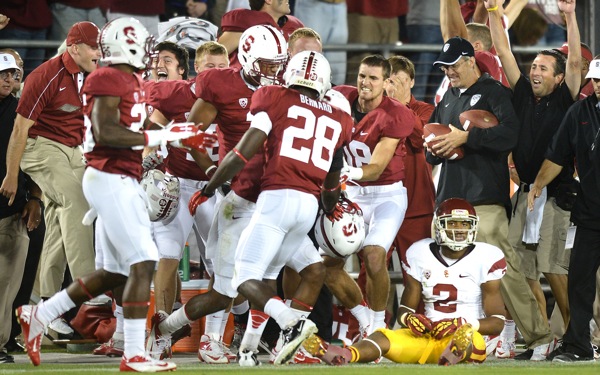 (MCT) When No. 15-ranked USC plays at No. 11 Stanford on Saturday, the circumstances will be similar to 2012, when the Trojans went to Palo Alto for their first test of the season.

The No. 2-ranked Trojans were stunned by the Cardinal in a 21-14 loss that some players believe derailed the season. USC went from being the preseason No. 1 team to finishing with a 7-6 record. Many players were barely able to speak after the game.

“For the older guys, it’s a memory to draw upon,” senior tight end Randall Telfer said. “But you can’t dwell on past losses.”

The Cardinal (1-0) also have a memory for motivation after losing to USC, 20-17, last year at the Coliseum where a sold-out crowd famously stormed the field after the game. Stanford quarterback Kevin Hogan passed for only 127 yards and completed 14 of 25 passes.

“I had a lot of time this offseason to get ready for Week 2, and I feel really good,” Hogan said. “We’ll have a good plan and a lot of stuff to show.”

USC cornerback Kevon Seymour did not hold back when discussing the secondary’s performance against Fresno State.

“We have an actual (defensive backs) coach now that teaches us,” Seymour said.

Last season, defensive coordinator Clancy Pendergast decided to also coach the secondary. It was controversial because the defensive staff had one less assistant and it caused former coach Lane Kiffin to fire secondary coach Marvin Sanders, who Kiffin said was the “best secondary coach in the nation.”

USC ran a Pac-12 record 105 plays against Fresno State, but Coach Steve Sarkisian cautioned against expecting that every week, especially with Stanford a pro-style team that likes to run the ball.

“I don’t know if we can average over 100 plays a game, but we would like to play briskly,” Sarkisian said. “(Stanford) definitely has a game plan. If you want to be champions in this conference, you have to beat the champions.”

One reason USC ran so many plays was its success on third down. The Trojans converted their first eight third-down plays against Fresno State and finished 11 of 18.

USC defensive tackle Leonard Williams lived up to his preseason hype with seven tackles, three pass breakups and an interception against Fresno State.

“It’s a great thing when your best player plays with the most effort,” Sarkisian said.

Williams said the defense could play better, especially the run defense, which faltered in the third quarter.

“There’s a lot we need to improve; we have to work on our goal-line defense,” he said.

USC quarterback Cody Kessler was named Pacific-12 Conference Offensive player of the Week. Kessler passed for a career-high 394 yards and four touchdowns. He tied career highs with 25 completions and 37 attempts.

“I learned a lot about Cody,” Sarkisian said. “He’s a tough kid. He was gutty.”