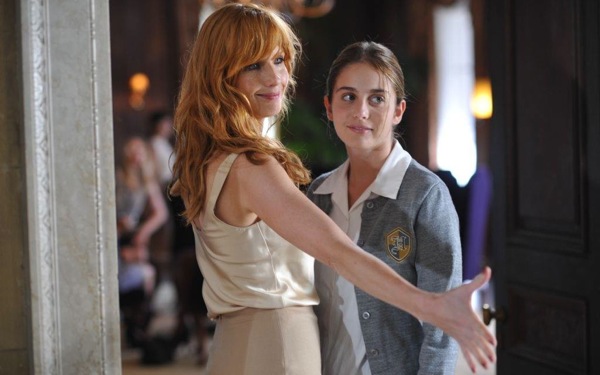 Coming-of-age stories are nothing new in Hollywood. In fact, we’re seeing more of these films thanks to adaptations of young adult novels. Some are great, while others are total duds. The latter can be said of the film adaptation of author Jane Mendelsohn's Innocence.

The film stars Sophie Curtis (At Any Price, Arbitrage) as Beckett Warner, a 16-year-old girl who is haunted by her mother's death (she passed away in a Montauk surfing accident). As a way of giving her a fresh start, her father decides to move them to Manhattan, where Beckett is soon enrolled at an exclusive private school.

Soon after arriving there, Beckett experiences another tragic event—the alleged suicide of a classmate. This event only intensifies her hallucinations, as well as gives way to her curiosity about what the school’s nurse, Pamela Hamilton (Kelly Reilly), is really hiding in regards to the suicide.

Beckett’s search for an answer only spells danger...but not all is bad for her. As with any coming-of-age movie, there is also a love story. Yet, this first love—as all first loves are—is complicated and adds to the danger she has walked into.

Innocence does a good job of examining the delicate state of the American teenager, especially in terms of dealing with loss, falling in love and the naiveté that comes with growing up. Beckett is obviously grieving her mom’s death, which is clearly seen in the film. On top of that, she has to experience having a classmate commit suicide right in front of her. I think I would also hallucinate if I were her, as well as question life.

As for experiencing first love, the film does a nice job of showing the awkwardness and sweetness that come with falling head over heels for the first time. Beckett so desperately needs to love and have somebody there for her, but she is also scared to get close. She is pure and innocent but also wants to find herself, as every teenager can attest to.

And the film's acting is actually decent; it does not feel forced or overly rehearsed. Instead, it is believable, and the dialogue sounds natural; it’s nothing like the acting in other YA novels-turned-movies, like Twilight.

However, that’s where the positives end.

If Innocence, the novel, had just been about the perils of losing a parent and being a teenager, this film would have worked. But if you’ve read the book, then you might know that the film deals with the supernatural, and it is here where it becomes something that’s been unnecessarily done over and over again (going back to Twilight).

Not only has it been repeated as a theme, but the execution of the supernatural elements in Innocence comes off as cheesy. It is like watching one of those Disney Channel movies that use terrible CGI. What bothered me most were the blue eyes given to Pamela and her Alumni Book Club companions. Without that element, or at leas the bad CGI, the film would have done just fine.

If you are a fan of this book or perhaps a “tween,” Innocence might appeal to you...if you are neither of those, your time would be better spent watching another film.