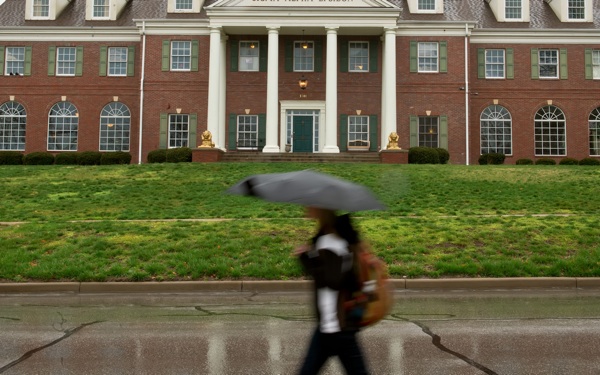 A fraternity (not Lambda Chi Alpha) on the University of Kansas campus in Lawrence.
(Credit: David Eulitt/Kansas City Star/MCT)

Last year, a freshman at the University of Kansas was walking home after a Lambda Chi Alpha fraternity party. She was drunk, so her male classmate accompanied her back to a campus dorm, where they both lived. That night, he allegedly raped her in his room.

The young woman (who wanted to remain anonymous) accused the man of raping her, and he even admitted later to campus police that he had sex with her even though she said "no." Still, the only punishment he received was probation, a ban from university housing, a four-page "reflection" paper and counseling. Police and the district attorney have reportedly refused to prosecute him.

The woman told the Huffington Post,  "I was just so baffled at how little of a punishment he was getting."

She added, "Basically, he was getting a slap on the wrist."

That "slap on the wrist" would not even include community service, which the university's associate general counsel, Rachel E. Rolf, reportedly wrote would "strictly be punitive. The student conduct process, is intended to be educational, not punitive."

Rolf dismissed the woman's appeal against her rapist's sanctions in March.

Hoping to finally get justice, the woman filed a Title IX complaint against the university in April and is sharing her story with the press.

She told HuffPost: "People need to know how little attention this is being given when they do come forward to the university. You get serious consequences for plagiarizing, and you get horrible consequences if you have a six-pack of beer in your dorm. I think this is more serious than those, and it's given very little attention."