REVIEW: 'The Vampire Diaries': The Complete Fifth Season on DVD 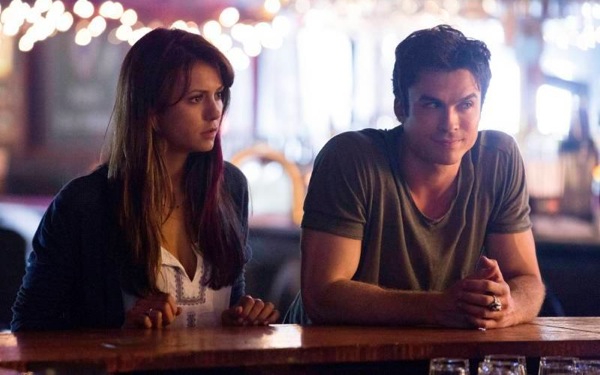 The complete fifth season of “The Vampire Diaries” is arriving Sept. 9 on a DVD and Blu-ray Combo Pack! And while I know we are all dying to see the new season air on Oct. 9, this DVD series is packed with a lot of goodies for all you fans.

In addition to all of the supernatural-filled episodes (and the show’s 100th episode), the DVD set also comes with a video of the 2013 Comic Con panel, a pop quiz about the show, a behind-the-scenes look at Kat Graham’s (Bonnie) life on set, a gag reel and a lot of unaired scenes.

Season 5 kicks off with Elena and Caroline arriving to college after experiencing a crazy senior year in Mystic Falls. The season tackles a lot of the unfinished business from season four: Bonnie attempts to pretend that she is alive with the help of Jeremy; Stefan struggles with the traumatizing experience of being locked inside of a coffin at the bottom of a lake; Silas is on the hunt for mortality; and Katherine has trouble adjusting to her new life as a human. The characters also meet an evil scientist/professor who attempts to wipe out vampires, and they run into new supernatural creatures called the Travelers.

The unaired scenes give fans more of an inside look at the relationship between Gregory (the traveler living inside of Matt’s body) and Nadia. While the inclusion of those scenes in the show could have overwhelmed the already crazy storyline, they add more to Nadia’s character and show a side of her that you don’t get to see. If you also couldn’t get enough of actor Kendrick Sampson’s character, Jesse, there’s a deleted scene featuring all of his hot glory on Disc 2.

Skip the 2013 Comic Con panel. It’s pretty boring, and a lot of babbling happens. Plus, you can have all of your Season 5 questions answered by just watching it.

The special feature titled “I know What You Did…In the Last 100 Episodes” includes a funny pop quiz about the show with the actors and the executive producers. Candice Accola (Caroline) and Paul Wesley (Stefan) hilariously and embarrassingly stumble over the question, “What is the name of the poison toxic to vampires?” (Come on guys—VERVAIN is mentioned in like every episode).

In the special feature “The Vampire Diaries: To the other Side and Back,” fans get to learn about the mystery of the “other side” that Bonnie serves as an anchor for. It’s kind of creepy, so make sure to watch that part when all of the lights are on.

The behind-the-scenes look with Graham is, unfortunately, kind of a fail. It would’ve been nice to see more of Graham’s life acting on set instead of hearing about her hair, makeup and wardrobe.

And lastly, this gag reel is not the funniest one out there, but you do get to see Michael Malarkey (Enzo) make some very strange animal noises.

"The Vampire Diaries": The Complete Fifth Season DVD and Blu-ray Combo Pack will be available on Tuesday, Sept. 9, 2014.