A Letter From Japan: The Photographs of John Swope 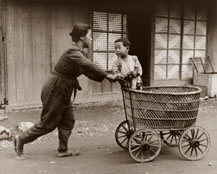 Most people can tell you that Hitler ran Germany during World War II. A fraction of those know Mussolini dictated over Italy. Even less can name the Japanese Emperor willing to sacrifice his entire nation in order to win the war – and, mind you, this is in a post-Pearl Harbor world.

Notwithstanding Michael Bay’s oeuvre, the majority of films dealing with the Second World War take place in the European theater, with the most famous Pacific theater theatrical release being the ninth grade history class staple Tora, Tora, Tora.

The Hammer museum hopes to remedy this with A Letter From Japan, wherein John Swope photographed the post-war Land of the Rising Sun. While officially hired by the Navy to photograph the release of Allied prisoners, Swope went above and beyond the (literal) call of duty, snapping pictures of the local population of Japan: a stately Japanese soldier looks stoically at the ground; a mother pushes her child in a wooden stroller.

Coinciding with this exhibit is a screening of propaganda films, including the Academy Award winning Design For Death directed by … Dr. Seuss? The fog of war, indeed.

And it’s Hirohito, by the way.