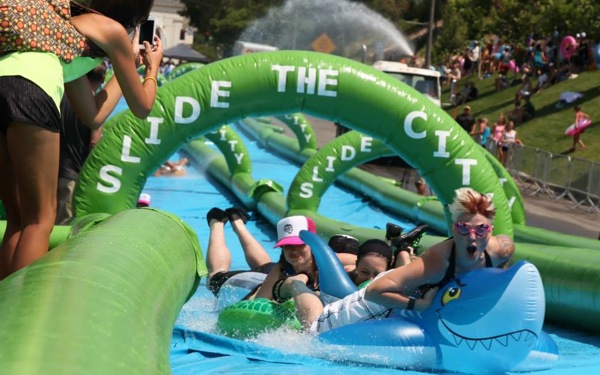 If you're looking to tap into your summer childhood memories, get wet and have fun, then you'll want to register for "Slide the City."

On Sept. 28, DTLA will host a giant, 1,000-foot, 3-block-long water slide for people to slide down from noon to 5 p.m., starting at Temple and Los Angeles Streets.

LAist reports registration is open now, and tickets run as high as $50! Fifteen bucks can get you down the slide one time (but you have to bring your own inflatable tube); $30 lets your ride it three times (and they provide you with a tube); and a whopping $50 grants you unlimited sliding time AND an extra hour's worth of fun.

Now, there was an online petition to prevent the slide from coming (because, ya know, the drought), and at the time of posting, it has received more than 10,500 signatures. However, a compromise has been reached since the event will use 12,000 to 16,000 gallons of reclaimed water.

"The Slide the City owners have struck an agreement with Councilman Jose Huizar to transport the water used to Griffith Park," reads the petition, "to replace a day's worth of watering the park would ordinarily do. Slide the City will also donate some profits to generosity.org, a nonprofit that builds wells in Third World countries where fresh water is scarce."

So, let the fun begin!