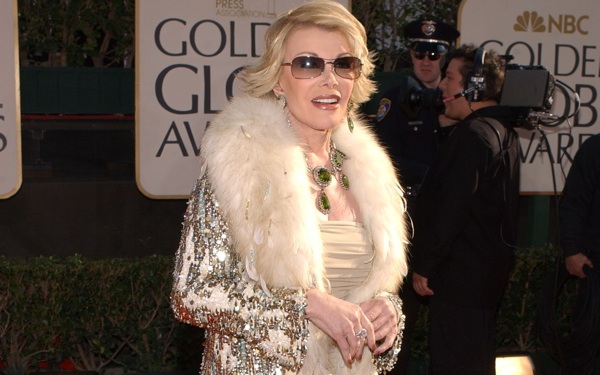 Joan Rivers, 81, died Sept. 4 after suffering complications during surgery on her vocal chords.

Although Rivers is gone, she leaves behind many accomplishments. She started off doing stand-up comedy in clubs and then became a permanent guest on "The Tonight Show with  Johnny Carson" in 1983. In 1986, she became the first woman to host her own late-night talk show, “The Late Show Starring Joan Rivers" (though not for long). The daytime talk show "Joan Rivers Show" was born eight years later, and finally, Rivers hosted "Fashion Police," where she spewed out raunchy jokes about celebrities and even threw digs at herself.

Say what you want about her "mean" jokes and sassy comebacks; without a doubt, this groundbreaking comedienne helped pave the way for today's female entertainers and comics.

Besides her legacy, Rivers leaves behind hilarious quotes that speak to all women when it comes to aging, sex and body image. Although they may seem self-deprecating on the surface, her blunt words detail the harsh truths about being a woman in today's society. And they're said in a witty way that only Rivers could pull off.

Ultimately, Rivers reminded us women that although it's not always easy being a female, we can find humor in every stage of life we go through:

3. "Why should a woman cook? So her husband can say, 'My wife makes a delicious cake' to some hooker?'"

4. "I don't exercise. If God had wanted me to bend over, he would have put diamonds on the floor."

5. "With age comes wisdom. You don't need big boobs to be feminine. Look at Liberace."

7. "I hate housework. You make the beds, you do the dishes, and six month laters, you have to start all over again."

8. "A study says owning a dog makes you 10 years younger. My first thought was to rescue two more, but I don't want to go through menopause again."

9. "The fashion magazines are suggesting that women wear clothes that are 'age appropriate.' For me that would be a shroud."

10. "My grandson is mad at me. He's mad at me because I squandered his college fund on Spanx. It's a lot, but there's a lot going on there."

11. "Old women are suctioned to the ground. Boobs, out of a brassiere, in the morning, it just goes. I use my left boob as a stopper in the tub."

12. "Women should look good. Work on yourselves. Education? I spit on education. No man is ever going to put his hand up your dress looking for a library card."

13. "My best birth control now is just to leave the lights on."