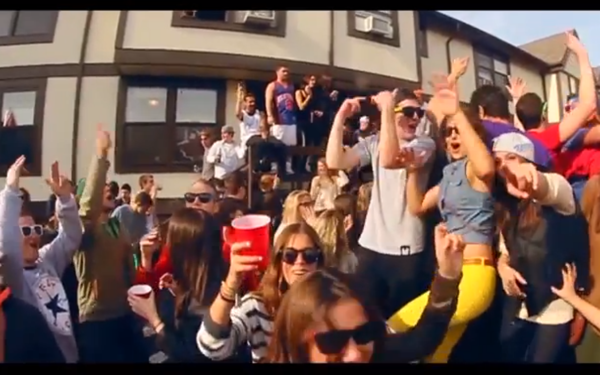 Over at Syracuse University, there's this place called Castle Court where students used to gather and rage to celebrate football victories, coming back to school, etc.

However, after the New York-based university was named Princeton Review's No. 1 party school in the U.S. this year, the court has been banned. And students are not happy about it (via Huffington Post).

In a video posted on YouTube channel I'm Shmacked, you hear students talk about what Castle Court meant to them as video footage of the campus and students partying in the court plays on.

"It's been kind of a historic thing," says one male voice, "that every time there's a game or coming back to school, you just want to have an outdoor party and they clear out all the cars on Castle Court."

He continues, "Everyone gets rowdy at the same place, at the same time so you don't have to separate the campus."

Other students chime in, saying Castle Court was "fun and safe" and just a place where the student body could unite and "celebrate 'Cuse." One student also says the school has been overreacting with shutting down the court and parties after the party school school rankings came out.

The Huffington Post reports a Syracuse rep wrote, "Very large gatherings [at Castle Court] have posed significant risk to the health and safety of students who attend and participate. These changes do not mean eliminating all fun or the positive aspects of social life and school spirit represented so well at Syracuse. Rather, they mean that we take the safety and well-being of our students and the campus community seriously."

At the time of posting, the YouTube video (called "#SaveCuse") has attracted more than 40,000 views.