Bruins Thinking of Pasquale ‘Every Day’ 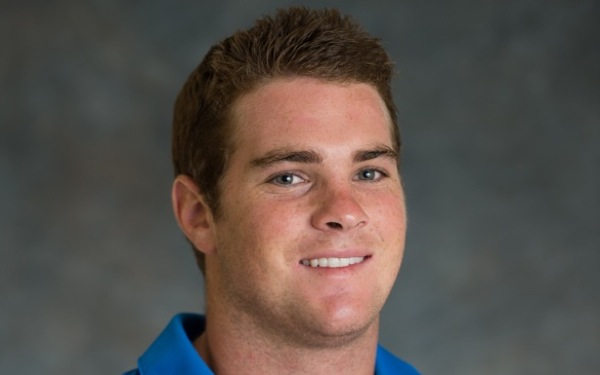 Nick Pasquale was 20 years old when he died.
(Credit: UCLA)

(MCT) LOS ANGELES—There are reminders of Nick Pasquale all around the UCLA football program.

Coach Jim Mora still has a voice message from Mel Pasquale, his father. Receiver Jordan Payton wears a wristband with Pasquale’s name and number. And A.J. Pasquale, Nick’s brother, darts around the practice field performing his duties as a staff member.

It was nearly a year ago that Pasquale, a walk-on receiver, died when struck by a car while walking home from a friend’s house late at night, just hours after appearing in his first game.

The accident bonded the UCLA football program and the community of San Clemente, where Pasquale played high school football.

“I always remember him,” Payton said. “I always take time to pray and talk with him, basically.”

Last year’s game at Nebraska was emotional for UCLA. The Cornhuskers held a pregame tribute to Pasquale, which included fans’ releasing blue and gold balloons. The day after their 41-21 victory over Nebraska, the Bruins attended Pasquale’s service in San Clemente.

The memory has not faded.

“I don’t think ‘forget’ and ‘Nick’ should be in the same sentence,” receiver Devin Lucien said.

Payton said not a day goes by that he doesn’t think about Pasquale.

“I don’t know if it has a toll like it did last year, but it is definitely still with us,” Payton said.

A.J. Pasquale joined the UCLA football operations staff and Mora said he is a living reminder of Nick.

“He is so devoted to the job,” Mora said of A.J. “He is so much like his brother. He’s just doing off the field rather than on it.”

UCLA honored Pasquale several ways, including having his No. 36 emblazoned on the Rose Bowl turf. Mora remains close with the family. Mel and Laurie Pasquale made a five-figure donation to UCLA football this year through the Nick Pasquale Foundation.

“We think of Nick every day,” Mora said. “He’s a big part of what we do. His family is a big part of us. We’re never going to let go of it. It still bothers me when I think about it. It was a tough, tough deal and still is.”

The Live Like Nick 5K Run/Walk will be held at San Clemente High on Sunday.

The entry fee is $36, $10 for children 12 and under. Proceeds go to the Nick Pasquale Foundation. Information: livelikenick5k.com. Donations can be made at nickpasqualefoundation.com.

The loss of running back Steven Manfro has left a hole in the UCLA lineup. Freshman Nate Starks could fill it.

Manfro was lost for the season when he sustained a torn knee ligament during practice Tuesday. He was part of the Bruins’ three-man rotation at running back, along with Jordon James and Paul Perkins.

Offensive coordinator Noel Mazzone said a replacement has not been chosen. “It’s on a trial basis right now,” he said.

Starks is the likely candidate when the Bruins play Memphis on Saturday. He, James and Perkins were the only running backs not on the scout team this week. He was also impressive in practices leading up to UCLA’s opener at Virginia.

Starks, 6 feet, 190 pounds, would give the Bruins a different look.

“He’s a little bigger kid for us,” Mazzone said. “It would be fun to hand him the ball.”