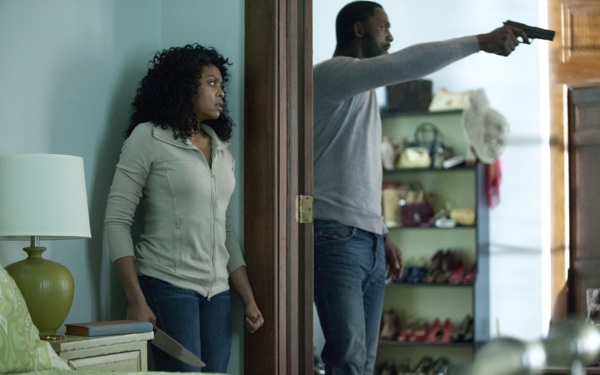 If you’re looking for adrenaline, nonstop action, the beautiful Taraji P. Henson and the ever-so-dreamy Idris Elba, then you better rush to theaters to see the contained psychological thriller No Good Deed on Sept. 12.

Henson plays the perfect strong-willed, independent and resilient woman that audiences don’t get to see enough of in Hollywood films these days. A question many people may ask before seeing this movie: does she have the skills for a psychological thriller? The answer is, yes; she completely masters this role.

Which really shouldn’t be a surprise. After all, she was nominated for an Oscar for her supporting role in The Curious Case of Benjamin Button; she was a tough, smart detective on “Person of Interest;” and she starred in the 2001 dramedy Baby Boy with Tyrese Gibson.

But still, lately Henson has been known as a funny-woman thanks to her recent roles in the more lighthearted romantic comedies Think Like a Man and its sequel.

“It’s very different from acting in romantic comedies because you’re petrified the entire movie,” said Henson. “I’m always in love or in a relationship, but this time it was…different.”

“Different” is perhaps what Hollywood needs from actresses such as Henson, especially when it comes to landing leading female roles. In a recent USC study, women had less than one-third of all speaking characters over the last six years in 600 films. However, the study did find that women have been making strides in blockbuster films in the comedy, action/adventure and animation genres.

“I think we’re getting more opportunities as women,” said Henson while talking about her feelings towards the modern entertainment industry. “I always asked, ‘Where is the female cop duo’? That’s why The Heat is great. It’s all about female protagonists. Hollywood is opening up their minds a little bit, and they’re not just using women as sexy sidepieces anymore. We’re intelligent beings that can act.” The 43-year-old also said she admires other female character-heavy shows and films as well, showing appreciation for Netflix’s “Orange is the New Black,” which has a strong and diverse female cast.

But Henson herself definitely emanates the strong yet sexy character in No Good Deed, and by the end of the film, audiences will surely be on the edge of their seats, cheering her on. She kicks some serious butt in a scene with Elba, who—in subtle exasperation—explained that the short fight scene took a lengthy three days to film. And when he and Henson finally nailed it, he playfully admitted that he was proud of and surprised by his co-star’s overt passion and strength whilst attempting to knock him out.

Despite the fighting and the fact that Colin (Elba) is a psychotic, narcissistic killer, for some strange reason, you’ll want him and Terri (Henson) to fall for one another. The sexual tension between the two is palpable, and after seeing the film, I truly believed the two had worked together in the past. Their on-screen relationship is so believable and appealing that I guessed they have been friends for awhile. However, after talking to Henson, I was surprised to discover that not only was No Good Deed the first movie she and Elba have starred in together, but they’d only briefly met in the past.

When asked about how it was working with her handsome co-star, Henson joked, “He’s quite difficult and not too easy on the eyes. He has that dumb accent, but other than that, he’s great.”

She continued seriously, “He was amazing to work with; it was just like working with a friend. Ever since we knew about each other, we wanted to work together.”

The pair explained how they constantly pushed each other’s buttons on set, but that playful tension made for great chemistry onscreen. Considering that Elba is one of the most desired men in Hollywood, Henson—being the comical woman that she is—said she wanted to break down his confidence a bit. By the end of the film, everyone was teasing Elba, too, but it was all fun and games, and the atmosphere on the dark (both literally and figuratively) movie set was ironically light-hearted and fun.

But still, Henson admitted that as soon as she’d leave the movie set at night, she’d go back to the beautiful yet eerie Atlanta mansion she was staying in, have her agent escort her to the door, sprint up the stairs, lock the bedroom door and curl up under the covers.

“Talk about method acting,” she laughed.

Enter to win run-of-engagement pass for No Good Deed by clicking here!