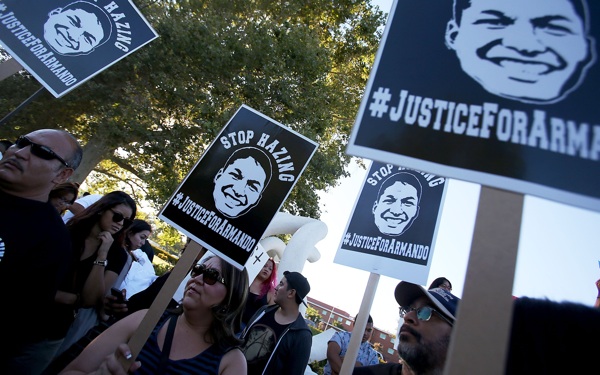 Family and friends of Armando Villa hold up candles and placards during a rally.
(Credit: Luis Sinco/Los Angeles Times/MCT)

"Hazing is stupid and senseless and against the law in California," said the university's president, Dianne F. Harrison, Thursday when local and national Pi Kappa Phi chapters voted to withdraw from the university.

The university's investigation found that Villa was hazed by fraternity members, and the Los Angeles County Sheriff's Department is conducting a separate investigation.

Villa was found in a ditch in the Angeles National Forest on July 1 while going on a pledge hike. He was barefoot with blisters on his feet and no water. He was pronounced dead at the hospital.

From the beginning, his family had asserted that he died as part of a hazing ritual. Villa's aunt had told media outlets that he was deciding whether or not he should continue participating in the fraternity's activities.

His aunt also told NBC Southern California, "We want justice, we want truth, we want anybody with any kind of information that was there that day on that mountain, we want to know what happened."

"They talk about a fraternity being a brotherhood based on honor, but neither the local chapter, the national parent organization of Pi Kappa Phi, nor any of Armando’s so-called brothers have done the honorable thing by telling us what happened to our son,” said Villa's parents in a statement.